While the focus is currently on the January transfer window, Milan will steadily welcome back key individuals into the fold in the second half of the campaign.

The Rossoneri will return from the winter break in fifth place in the Serie A table, just a point behind fourth-placed Lazio, with Gennaro Gattuso securing a much-needed boost last time out with a win over SPAL.

SEE MORE: Why Arsene Wenger is the right man for the AC Milan job

With the transfer window now open for business, flaws in the squad can be addressed but whether or not sensible additions can be made remains to be seen as the last thing we want to see is panic buying to bring in short-term fixes.

In turn, Gattuso and the hierarchy will be closely monitoring the progress being made by key players who have been out injured in recent weeks, with La Gazzetta dello Sport noting that a quintet of Milan stars are pushing on with their respective recoveries.

Lucas Biglia, Mateo Musacchio and Andrea Conti are said to be closest to nearing full fitness with the latter duo flirting with a comeback in recent weeks but not quite establishing themselves in the starting line-up. They’ve been tipped to really kick on when things resume later this month.

While there are flaws in Musacchio’s game, there is no denying that he’s a worthy starter, while it’s hoped that Conti can be more assertive and play with more confidence as he has gradually worked his way back from two serious knee injuries.

As for Biglia, while question marks can be raised over his limited creative play in that deeper midfield role, there is no denying that his experience, calmness and leadership in the heart of the side is missed as Milan have consistently lost midfield battles without him over the past two months.

Add to that trio the returns of Mattia Caldara and Ivan Strinic at some stage in the season, Milan suddenly have much more quality and depth available to Gattuso and so that could yet have a knock-on effect on our plans for January.

Caldara remains the ideal option next to Alessio Romagnoli as they complement each other well and can form a formidable partnership. As for Strinic, with talk of Diego Laxalt leaving this month, as per Calciomercato, his return could allow Milan to cash in on the Uruguayan.

Regardless, we’re still light up front behind Gonzalo Higuain and Patrick Cutrone as if we’re going to secure a top-four finish and compete for the Coppa Italia, more firepower is needed.

Further, Lucas Paqueta will be a fundamental addition to add creativity and a goal threat in a more central role in midfield, filling the shoes of Giacomo Bonaventura who is out until next season.

Nevertheless, additional quality in that department would be welcome to add creative class, while Milan could still do with adding another winger to allow Hakan Calhanoglu to continue to play in midfield as he has looked more effective in the last two outings.

Add Paqueta to the mix though and perhaps the Turkish playmaker will be forced to return to the left wing where he doesn’t look entirely comfortable.

In order to secure a top-four finish, reinforcements this month are necessary. However, getting these crucial players back to full fitness and having a major impact on our style of play and pursuit of positive results will be just as important as Gattuso may well have scraped through the most difficult period of the season and can look forward to more productive times ahead. 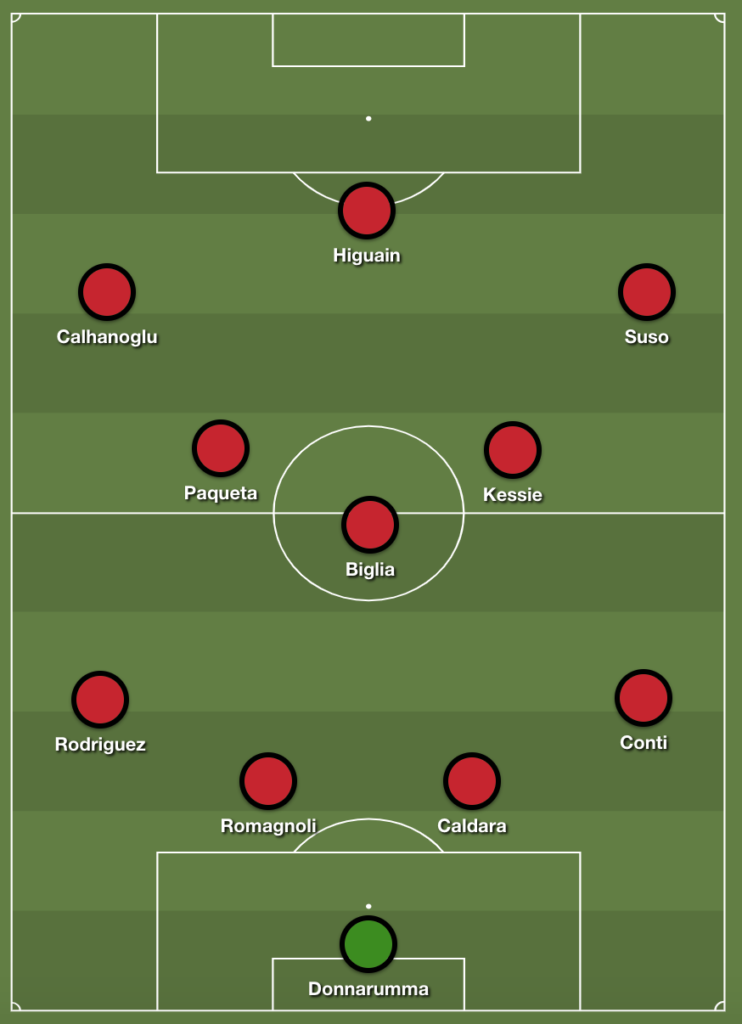 Possible Milan XI by the end of the season?