Milan face Juventus for the Supercoppa in Jeddah on Wednesday, and Gennaro Gattuso is expected to name as close to a full-strength XI as possible.

The Rossoneri advanced in the Coppa Italia at the weekend after an extra-time win over Sampdoria, yet despite playing heavy minutes, many of those named in the starting line-up on Saturday are expected to get the nod in midweek too.

As per MilanNews.it, it’s suggested that only two changes will be made by Gattuso, with Gianluigi Donnarumma and Davide Calabria coming in for Pepe Reina and Ignazio Abate respectively.

Given Reina’s performance at the weekend, he might consider himself unfortunate not to keep his place, but ultimately Donnarumma remains first choice and given the magnitude of the game, it seems only right that he’s re-called to the starting XI.

Elsewhere, it would appear to be the same formation, with Lucas Paqueta tipped to keep his place after impressing at the weekend as the Brazilian starlet is clearly impressing Gattuso enough both physically and tactically to ensure that he isn’t rested for this one.

All eyes will be on Gonzalo Higuain up front though, as amid intense speculation over his future, he’ll be expected to produce a committed performance for us and fire us towards claiming the first piece of silverware on offer this season.

In terms of key battles, with Juventus being tipped to adopt a 4-3-3 too, Hakan Calhanoglu will have to work hard defensively to nullify the threat that Joao Cancelo can pose going forward as he returns from injury to feature.

Winning the midfield battle could be crucial, and so it’s imperative that Franck Kessie and Tiemoue Bakayoko impose themselves physically and with their tenacity to keep Miralem Pjanic and Rodrigo Bentancur quiet, while giving Paqueta the support needed to help offer creativity from midfield too.

It could be argued that starting Diego Laxalt would be the more sensible option if Douglas Costa starts for the Bianconeri, as his pace against Ricardo Rodriguez could be a disaster in waiting. Calabria will have his hands full too whether it’s Paulo Dybala or Cristiano Ronaldo drifting to our right flank, and so the back four have to communicate and keep things tight collectively to keep their front three quiet.

On paper, Higuain could well have a very tough night up against former teammates Leonardo Bonucci and Giorgio Chiellini. With that in mind, he has to drop deep and use his movement and pace in the channels to  pull them around the pitch, allowing the likes of Calhanoglu and Samu Castillejo to hurt Juve in the final third.

We can ill-afford to leave the 31-year-old isolated up front in what could potentially be his last game for us. In turn, Paqueta and Kessie making runs from midfield will be crucial, while Patrick Cutrone could be Gattuso’s ace off the bench again after making such an impressive impact against Sampdoria.

Bringing him and Andrea Conti on in the latter stages if we’re still in the game could be a very important option, and a potentially decisive one based on what we saw at the weekend. 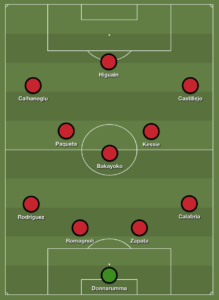