Milan return to Serie A action on Monday as we make the trip to face Genoa hoping to launch a serious assault on the top four in the second half of the campaign.

Results elsewhere so far this weekend have seen us drop to sixth place in the table, two points adrift of fourth place as we now have ground to make up after our disappointing run in December.

Gennaro Gattuso will be hoping for a positive reaction to our Supercoppa disappointment in Jeddah, as after missing out on silverware, the focus has to immediately switch to avoiding any further slip-ups in our pursuit of Champions League qualification.

Changes are expected against the Rossoblu, as Alessio Romagnoli, Franck Kessie and Davide Calabria are all suspended, while Gattuso will be absent from the touchline too after receiving a one-match ban in the fall-out to our defeat to Juventus.

Long-term injury absentees Mattia Caldara, Lucas Biglia and Giacomo Bonaventura all remain sidelined, while with speculation suggesting that Gonzalo Higuain has all-but sealed a move to Chelsea, as per the Guardian, it’s unlikely that he will start.

With that in mind, Patrick Cutrone could be given a chance to lead the line and show that he’s more than capable of filling that void, while there is great news in the form of Suso being available after his ongoing troubles with a groin injury, as noted by La Gazzetta dello Sport.

Jose Mauri is being tipped to step into midfield to replace Kessie, and it’s hoped that his quality on the ball will show as well as his tenacity and defensive work out of possession to ensure that we have a different dynamic in that area of the pitch.

As for Calabria’s absence, Ignazio Abate is expected to get the nod at right-back, although it has to be said that Andrea Conti is surely now edging ever closer to being given a starting berth as he continues his return from back-to-back serious knee injuries.

Mateo Musacchio is likely to replace Romagnoli alongside Cristian Zapata, but that aside, there are still several key figures set to continue to make up the starting XI with Lucas Paqueta expected to get the nod again as he continues to impress.

Genoa will be missing Krzysztof Piatek through suspension as he prepares to join us next week, as per Calciomercato, and so we won’t get a closer look at our prospective new signing. However, Cesare Prandelli’s side certainly still pose a real threat and so we’ll have to be switched on in order to nullify their quality and control proceedings throughout to secure three vital points. 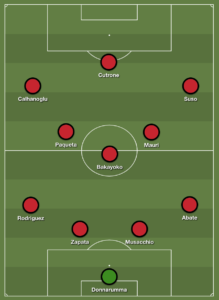