Milan host Napoli at San Siro on Saturday night hoping to secure a positive result and keep hold of fourth place in the Serie A table.

This week has been dominated by talk of new signing Krzysztof Piatek, with the 23-year-old being unveiled on Thursday and he immediately linked up with new teammates in the afternoon.

It’s highly doubtful that he’s had enough time to acclimatise and soak in Gennaro Gattuso’s tactics and instructions to be comfortable enough to immediately be placed in the starting line-up, and so it’s expected that he will start on the bench.

That in turn means that Patrick Cutrone will get the chance to lead the line again after producing a wonderful assist for Suso in the 2-0 win at Genoa last time out.

Elsewhere, captain Alessio Romagnoli, Franck Kessie and Davide Calabria all return from suspension and are expected to slot straight back into the XI, while Gattuso will also return to the touchline having been forced to watch from the stands on Monday.

That should see us return to a familiar line-up, as noted by MilanNews.it, with Lucas Paqueta continuing to start in midfield which in turn pushes Hakan Calhanoglu back out to the left wing despite seemingly being more effective in a central role.

Fabio Borini and Ignazio Abate drop out despite playing key roles in the win last time out.

It will be crucial to ensure Cutrone gets support from midfield given he’s likely to go up against Raul Albiol and Kalidou Koulibaly. As seen with the goals from Giacomo Bonaventura and Davide Calabria in the reserve fixture, breaking runs from deep will be key.

At the other end of the pitch, limiting Lorenzo Insigne’s influence will help, while it will be fundamental to win the midfield battle, especially with Allan missing for the visitors.

As for Piatek though, it would be a surprise if we don’t see him at some stage on Saturday night, whether it’s in search of a crucial goal to get back into the game or hopefully in a comfortable position as we look to see out a victory.

It will be important to integrate him as quickly as possible and to keep his confidence and momentum going after such an impressive first half of the campaign, and better yet, it would be superb if the Polish international is able to get off the mark immediately.

Time will tell if Gattuso believes that he’s ready to feature or not. 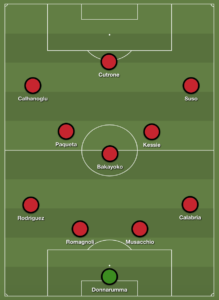