Milan will be looking to solidify their spot in fourth place in the Serie A table when they host Empoli at San Siro on Friday night.

Our impressive win over Atalanta in Bergamo last weekend kept us in fourth spot, but with Roma still just a point adrift of us, we can ill-afford to drop any points against Giuseppe Iachini’s side.

SEE MORE: Time for Hakan Calhanoglu to now prove his worth at Milan after ending goal drought

Mattia Caldara, Giacomo Bonaventura, Cristian Zapata and Pepe Reina all remain sidelined through injury, while there is a major absence for this encounter as Suso misses out through suspension.

In turn, that is likely to be the only change that Gennaro Gattuso makes, with Samu Castillejo tipped to step in on the right flank to offer a similar threat to his compatriot.

The 24-year-old has contributed just two goals and two assists in 26 appearances so far this season, and so he needs to start making a more decisive impact when he gets an opportunity.

This is arguably the perfect chance to do so, and it’s hoped that he answers the call by providing a creative threat to support Krzysztof Piatek and offer a balance with Hakan Calhanoglu on the opposite flank.

Speaking of our new Polish talisman, he’ll be looking to add to his tally of six goals in just five games since his January arrival, and in a game in which Milan will likely have plenty of possession, it will be crucial that he isn’t left isolated and players get up to support him while also making the most of his clever movement.

As for Calhanoglu, having now ended his goal drought in Serie A this season with that stunning strike at Atalanta, it’s hoped that the Turkish international has got the confidence boost that he so desperately needed.

The change on the right flank aside though, Gattuso is expected to go with a familiar XI which he will be delighted with as consistency and familiarity will be fundamental in sustaining our current good form. However, it has been suggested that Andrea Conti could get the nod over Davide Calabria.

Milan have won four of their last six games across all competitions while going unbeaten in that run. With that in mind, we now need to really make a statement and pile the pressure on our rivals to keep up with the pace that we set for a top-four finish. 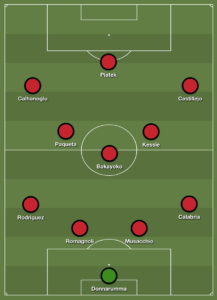