Milan face Lazio in the first leg of their Coppa Italia semi-final tie on Tuesday night, with Gennaro Gattuso expected to make changes to his starting line-up.

Friday night’s win over Empoli saw us hold on to fourth place in Serie A for another week, stretching our unbeaten run across all competitions to seven games.

Further, we’ve conceded just two goals in our last seven outings, while we’ve scored three goals in three consecutive games to suggest that we’re finding the right balance in the side.

Gattuso will reportedly look to rotate in midweek, with four changes being touted from the side that faced Empoli last week.

David Calabria is being tipped to replace Andrea Conti at right back, while Diego Laxalt could get the nod ahead of Ricardo Rodriguez on the opposite side of the backline.

Meanwhile, Suso could return from suspension with Samu Castillejo dropping out despite his decisive performance last time out, while Fabio Borini could step up on the left flank with Hakan Calhanoglu potentially earning a rest.

It could be argued that Gattuso should make further changes, giving Lucas Biglia playing time to regain his match sharpness after returning from his long injury lay off on Friday, while Patrick Cutrone arguably deserves being recalled to the starting line-up to ensure he continues to play a key role for us.

Nevertheless, the stakes are high now and with in-form Krzysztof Piatek to consider, it has to be said that it’s difficult to leave him out at the risk of disrupting his momentum.

The predicted line-up below shows just how seriously Gattuso is taking this even though the priority has to remain getting a top-four finish in Serie A this season.

However, with key players returning from injury, the Milan boss finally has the quality depth at his disposal in important areas to have the option to rotate if he so desires.

The vital thing for us now is to keep this good run going to keep our confidence and belief levels high ahead of facing Sassuolo on Saturday evening. 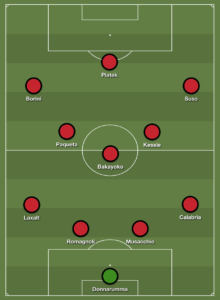