Milan face Inter in the Derby della Madonnina on Sunday night, with Gennaro Gattuso having no fresh injury concerns to deal with.

Giacomo Bonaventura remains the only absentee while there are no suspensions either as Ricardo Rodriguez is available again after sitting out the win over Chievo last time out.

The Swiss international is expected to return to the starting line-up, as suggested by La Gazzetta dello Sport, with Diego Laxalt dropping to the bench, while there are three other changes being touted for the crunch showdown.

Davide Calabria is set to return to the XI in place of Andrea Conti at right back after he struggled in a rare start, while Hakan Calhanoglu impressed off the bench against Chievo and could ensure Samu Castillejo drops out.

However, perhaps the most difficult decision that Gattuso will have to make is who starts in the heart of the midfield, with Tiemoue Bakayoko impressing during Lucas Biglia’s spell on the sidelines due to injury, only for the Argentine stalwart to put in a brilliant display last time out.

Biglia even produced a superb free-kick to open the scoring last weekend, but as per GdS, it’s suggested that it will be Bakayoko who gets the nod in midfield alongside Lucas Paqueta and Franck Kessie.

We may well lose something in Biglia’s ability to distribute quickly and efficiently, but Bakayoko’s strength, work-rate and powerful driving runs from midfield could add a crucial dynamic too.

Given our current form, we should feel confident heading into this clash as the injury crisis has cleared up and we have quality depth on the bench again, while Patrick Cutrone will undoubtedly be itching to get onto the pitch to leave his mark on the game.

Nevertheless, we can ill-afford to underestimate Inter who will be without Mauro Icardi and Radja Nainggolan among others, as a win would move us four points clear of our city rivals and strengthen our grip on a Champions League qualification spot.

Maintaining our impressive defensive record in recent weeks will be crucial as we’ve conceded just three goals in our last 10 games, defending resolutely and in an organised fashion as a team.

However, ensuring Krzysztof Piatek isn’t left isolated up front is equally as important, with the likes of Suso, Calhanoglu and Paqueta all having to get close to him and create chances to allow him to test the Inter backline. 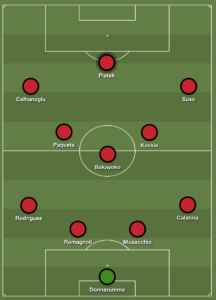