While it’s still early in the summer, things are beginning to take shape at Milan with the management in place and Marco Giampaolo now officially confirmed as Coach.

Between now and the start of the new campaign, the focus will be on who arrives, who leaves and how the players at the Italian tactician’s disposal fit into his plans as it’s widely expected that he will make the relevant changes which see the Rossoneri adopt his favoured 4-3-1-2 system.

SEE MORE: Three things Marco Giampaolo must do at AC Milan this summer

That in itself will require a significant amount of work at Milanello when the players return for pre-season training next month, as they will have to soak up the information and tactical plans that Giampaolo provides them and implement it on the pitch.

Add a raft of new faces to the mix and it’s likely that it will take time for things to gel.

Nevertheless, with transfer speculation rife, there is much talk about what our starting line-up could look like next season, and it’s perhaps easier to break things down into several categories when assembling our potential XI.

Assuming he stays despite ongoing talk of a possible move to PSG, as per Calciomercato, Gianluigi Donnarumma will continue as first choice between the posts.

Captain Alessio Romagnoli will remain a pillar of the defence, while Lucas Paqueta raised the standard in the second half of last season with his technical quality and creativity in the final third.

Coupled with the goals from Krzysztof Piatek, it’s fair to say that provided they stay injury-free and in good form, that quartet are a guarantee to be permanent fixtures in the starting line-up.

Andrea Conti and Davide Calabria will continue to battle it out for the right-back spot, while Mattia Caldara will hopefully return to full fitness and finally build that long-awaited partnership with Romagnoli in the heart of the backline.

Ricardo Rodriguez could yet come under pressure at left-back with Mario Rui linked with a move, as per MilanNews.it, but the defence is arguably going to stay relatively familiar perhaps with the addition of depth to replace Ignazio Abate and Cristian Zapata.

Hakan Calhanoglu, Giacomo Bonaventura and Suso will all hope to still have key roles to play moving forward, whether that be as part of the midfield three or in the trequartista role, while Patrick Cutrone and Andre Silva could yet stake a claim to be played alongside Piatek.

It’s likely that Calhanoglu and Bonaventura will battle it out with summer signing Rade Krunic, while Suso will have to prove he’s capable of playing in a more central creative role behind the front two, or perhaps even as a supporting striker for the main frontman.

As detailed in the graphic below, it’s expected that there will be several new additions to the squad this summer, and it’s the midfield that will need the most work done.

However, as per Gianluca Di Marzio, young defender Ozan Kabak is said to be closing in on an agreement to join us, with the 19-year-old impressing for Stuttgart this past season while he has represented Turkey from U15 level to U18s.

He’s arguably a long-term replacement for Zapata, as he’ll look to provide competition for Caldara and Mateo Musacchio.

As mentioned above though, it’s the midfield where big changes could arrive, and they’ll be needed given the number of exits in that department this summer.

MilanNews note that Milan could push ahead with a move for Jordan Veretout this week, while Stefano Sensi, Dennis Praet and Dani Ceballos are all options. Further, Lucas Torreira has been linked with a reunion with Giampaolo, as per the Evening Standard.

With Tiemoue Bakayoko, Riccardo Montolivo, Andrea Bertolacci and Jose Mauri all departing, there will need to be more than one signing for the midfield, but it remains to be seen how much of the budget is put aside for it.

Lucas Biglia and Franck Kessie will have their say as they hope to remain key figures for Milan, but in order to successfully implement Giampaolo’s system and preferred style of play both on and off the ball, it could be argued that they may struggle to fit in and so multiple midfield signings will need to be made to complement Krunic.

Time will tell who arrives as there are still various XIs in contention, but of the names that have continuously been linked with Milan over the past few weeks, this is arguably an indication of what our line-up could look like next season. 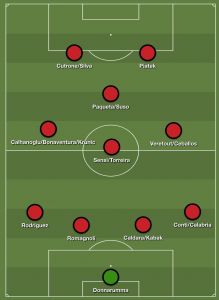