Marco Giampaolo will reportedly be presented to the media on Monday as Milan boss, and the hard work will start immediately for the Italian tactician.

As noted by MilanNews.it, a press conference has been scheduled for next Monday evening, with Giampaolo addressing the media ahead of the start of pre-season training.

SEE MORE: Why AC Milan’s forgotten man should get second chance under Giampaolo

The 51-year-old will be focused on implementing his ideas, tactics and stamping his mark on the squad in terms of the brand of football he wants to see next season, while speculation is rife that more new signings will arrive in the coming days.

As noted by Gianluca Di Marzio, an agreement is said to be in place with Empoli for Ismael Bennacer as that will be the second raid on the relegated outfit after the deal to sign Rade Krunic, while Calciomercato report that Theo Hernandez is also expected to be announced soon.

In turn, these new arrivals will be fundamental to Giampaolo’s ability to impart his style of play on the squad, as although they aren’t marquee names, they are astute additions to fit his ideologies as they are all comfortable on the ball and possess technical quality, while also offering energy and tenacity off the ball to help us hopefully play with a real identity and direction next season.

However, looking at the players already in the squad, our two January signings are likely to go from strength to strength next season, as they will both have pivotal roles to play under Giampaolo in his 4-3-1-2 system.

The 21-year-old arrived with a big reputation in January, and he will be under pressure to deliver given how his compatriots have fared in a Milan shirt over the years.

One goal and three assists in 17 appearances last season doesn’t scream out as being hugely impressive, but having now had a chance to acclimatise and adapt to life in Italy, the expectation is that he will show his full potential next season.

Particularly if he gets a favourable role as the trequartista in Giampaolo’s preferred 4-3-1-2 system, he will ultimately be the creative hub of the side, linking the midfield to the front two which should enable him to showcase his technical quality, creativity and eye for a goal.

We saw with his goal against Cagliari in February and his previous form at Flamengo that he knows how to get into dangerous positions and has quality in front of goal to find the back of the net if in a more advanced position, and so we should expect much more from him next season in terms of emerging as one of our key figures who will continue to raise the quality level of the line-up. 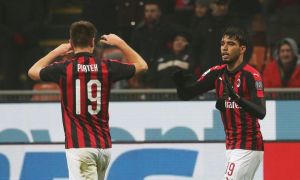 11 goals in 21 games was enough to make him a fans’ favourite already, as he wasted no time in showing his quality following his January move from Genoa.

However, there were times where the 24-year-old looked isolated as he struggled for the service that his superb predatory skills in the box need in order to flourish.

By moving Paqueta closer to him in the final third with a second striker alongside him, perhaps Andre Silva, it should avoid a scenario in which Piatek is left isolated and marked out of games. Instead, such a system and having quality around him will create space for him to exploit dangerous areas to make the most of his prolific finishing.

As we saw at Genoa last season, he flourished when playing in a two-pronged frontline, and while he certainly impressed last year, there is a feeling that he will only continue to improve and become more decisive in a system that arguably suits his characteristics better, and the team as a whole.

Both Paqueta and Piatek have already proven that they’re capable of making us a much better side, but there is a sense that the switch to a 4-3-1-2 will serve to make that glaringly obvious under Giampaolo, who is seemingly adding quality around them as he could rely on the attacking duo to lead the side in the upcoming campaign.

While there were certainly positives to come from Gennaro Gattuso’s time in charge, there was often a feeling that he wasn’t making the most of the creative and attacking quality at his disposal, as a side with the likes of Paqueta, Suso, Hakan Calhanoglu and Giacomo Bonaventura in it should be playing more expansive football.

It seems relatively clear what we’re getting with Giampaolo based on his work in previous jobs, and it may just be the formula to allow Paqueta and Piatek to take their respective games to the next level.