The expectation this season is that Marco Giampaolo will implement his preferred 4-3-1-2 system at Milan, given that’s what he has predominantly used in previous jobs.

It will be a refreshing change from the 4-3-3 that we’ve now adopted for several years, offering more tactical flexibility and the possibility of getting even more out of our key players by bringing them closer together on the pitch to build an identity and style to our play.

Naturally though, the names involved a potential starting line-up will continue to change as long as the summer transfer window is open, with more names being linked each day it seems while players could yet depart to make room for new signings.

As noted by La Gazzetta dello Sport though, Giampaolo perhaps dropped small hints with his training session at Milanello on Monday, giving an insight into what he is ultimately testing in pre-season to see whether or not it will work moving forward or if further changes are needed.

Most notably, Suso was said to have been deployed behind Andre Silva and Krzysztof Piatek up front, although given Lucas Paqueta is still on his post-Copa America break, it remains to be seen how the Brazilian’s return to the fold impacts Suso’s place in a possible starting XI.

As noted by Calciomercato, Roma were said to have made contact with Milan over the possibility of signing Suso this summer, and so if he departs, the expectation would be that Paqueta slips into the trequartista role in his place behind Silva and Piatek, who appear capable of offering the right balance up top.

Elsewhere, Hakan Calhanoglu was deployed as part of the midfield three, where he will be expected to play as a mezzala next season having arguably been wasted out on the left and seen his influence limited in a less favourable position.

Nevertheless, it’s now been suggested that the Turkish international could be on his way out with Sky Sport Italia, as noted by MilanNews.it, claiming he could be included in a swap deal with RB Leipzig for talented young defender Dayot Upamecano.

While that is a possibility given Giampaolo still has the likes of Giacomo Bonaventura, Rade Krunic and Franck Kessie at his disposal, it also remains to be seen what the intention is with Ismael Bennacer as Sky Sport Italia note that his move to join us will be made official after the Africa Cup of Nations final on Friday.

The 21-year-old will surely keep Lucas Biglia out of the line-up in front of the defence as his technical quality and passing will see him build attacks efficiently while that’s  matched by his energy and defensive tenacity to offer protection, although he can play in a more advanced role if necessary too.

That report adds that Jordan Veretout is likely to be Roma bound, and so unless an alternative is targeted and signed, that may suggest that Calhanoglu and Kessie could both stay as we’re already short in midfield.

Meanwhile, it was business as usual in defence in the training session on Monday, with Gianluigi Donnarumma in between the posts while Ricardo Rodriguez, Alessio Romagnoli and Mateo Musacchio were deployed in front of him and Andrea Conti and Davide Calabria were alternated.

Given the lack of depth in defence, it’s expected that Milan will still try to sign a centre-half in the coming weeks, while it’s hoped that Mattia Caldara can make a full recovery from his injury nightmare last season and still form a formidable partnership with Romagnoli, while Rodriguez is likely to lose his place to Theo Hernandez.

There are still key decisions that need to be made and the possible starting XI will be influenced by movements in the market over the coming few weeks.

Nevertheless, as seen in the graphic below, there is a rough idea of how Milan could line up next season, and while reinforcements will most certainly still be welcome to ensure we secure a top-four finish this time round, it will be fascinating to see if Giampaolo can get that extra quality out of these players to help them and Milan to take the next step that results in a return to the Champions League. 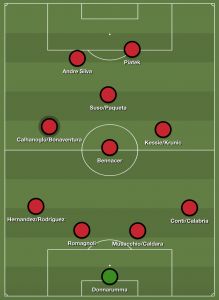