Milan’s busy summer continues as they officially confirmed the signing of Rafael Leao on Thursday, while Leo Duarte isn’t too far behind to continue to strengthen Marco Giampaolo’s squad.

With so much talk about the 4-3-1-2 set-up that the Italian tactician is set to adopt this season, the summer thus far has been about bringing in players who fit his ideas and the system.

Theo Hernandez looks a superb signing at left-back, Rade Krunic will help add quality and depth to the midfield and Ismael Bennacer will be an ideal cog in the heart of the midfield, once his arrival has been officially confirmed after undergoing his medical and signing his contract last month, as per Pianeta Milan.

As confirmed by the club, Leao has signed a five-year contract, while MilanNews note that he will likely cost us around €30m to prise away from Lille.

That’s an important investment in the 20-year-old, and it would suggest that both the hierarchy and Giampaolo are convinced that he’s a key addition to the squad to bolster our attacking options.

The talented youngster can play either as a centre-forward or as a second striker, and given the presence of Krzysztof Piatek to lead the line, it will be the latter of the two roles that our latest signing will be expected to fill for the most part.

With the pace and movement to stretch defences and get past his marker, Leao can provide a different dynamic in the final third and he has shown his ability in front of goal too. The lack of assists is perhaps an issue given he managed just two in 26 outings last season, and so that’s an obvious area in which he will have to improve to be as effective as possible for Milan.

Nevertheless, with La Gazzetta dello Sport noting that Angel Correa is still our priority and would perhaps be an ideal foil for Piatek, that could leave Leao as an impact player to ensure that there isn’t too much pressure on his young shoulders immediately.

Milan need to inject some pace into the side, and they seem to be convinced that they’ve got the right man for the job.

As for Duarte, as noted in the MilanNews report above, the Brazilian defender arrived in Milan this week and underwent his medical on Thursday as the wait goes on for an official announcement.

The 23-year-old has been given the big build-up with Serginho hoping that he can be our new Thiago Silva, but it’s worth avoiding unnecessary and lazy comparisons for now and to allow him to make his own name in a Milan shirt.

“He still has great room for improvement. Milan believed in him, [chief scout] Geoffrey Moncada also went to watch him closely in Brazil. Milan have made a great buy.

“Let’s hope he’s the new Thiago Silva. Like every Brazilian, he’ll need a period of adaptation, but he has the characteristics to do well in Italy.”

Looking at his strengths in terms of his physicality, reading of the game and composure on the ball to build from the back, he could look comfortable alongside Alessio Romagnoli, and the pair will no doubt hope to strike up a great partnership if Duarte gets the nod in the starting line-up from Giampaolo.

As with Leao though, there are weaknesses in his game too, namely his marking and concentration, and so he will have to improve and develop his game to ensure he’s able to successfully adjust to Italian football.

Nevertheless, the most pleasing aspect of the signings being made is that they fit a purpose and what Giampaolo is looking to implement, both from a tactical and individual perspective.

All our signings, and prospective signings, are young, hungry to impress and have the attributes on and off the ball to fit into the style of play that we expect to see this season. Further, they also solve issues in the squad whether it be voids that must be filled or upgrades to more effective options.

Time will tell whether or not it all clicks into place on August 25 when we face Udinese, but the signs are certainly promising that Milan will play with purpose, direction and energy this year, and the players will know their roles in the side and what is expected of them within a system that looks to ensure we play more attractive and attacking football.

As seen below, there appears to be good depth at long last too, with certain players able to shift into different positions if necessary, while there is of course still time for things to change with incomings and outgoings.

While some may not be convinced as of yet and there is still a lot for some of these players to prove, there is a real feeling that we’re embarking on the right system with the right individuals to give Giampaolo what he needs to ensure we make that final step back into the Champions League.

However, that’s perhaps a little too attacking and omits the likes of Suso, and so time will tell how Giampaolo finds that balance, with depth players such as Fabio Borini and Samu Castillejo seemingly set to stick around and play a role too. 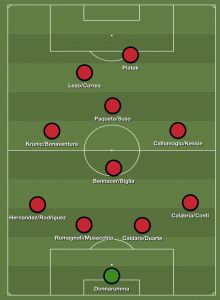