Milan face Udinese in our Serie A season opener this weekend with Marco Giampaolo taking charge of his first competitive game after his arrival this summer.

Key changes at management level were made as well as Gennaro Gattuso departing at the end of last season, with various question marks hanging over the club.

SEE MORE: Why key figure still has big role to play for Milan after injury nightmare

However, they’ve answered them well for the most part as we have a coach with a clear tactical identity and style of play, albeit he hasn’t had his new signings in early enough to integrate them in time to feature heavily from the start of the season.

Nevertheless, there is no time for excuses as the Rossoneri must make a positive start this weekend and hopefully make a statement that the changes made this summer will deliver a top-four finish.

Giampaolo’s preferred 4-3-1-2 system has been showcased in pre-season and while there have been positive signs, Milan will need to step things up on Sunday.

From the intensity and urgency in pressing off the ball higher up the pitch to the quicker and sharper passing between the lines and with players moving into space to create options, there has been a shift in our style of play compared to last season.

However, Giampaolo will likely have to start without some of his new signings as they haven’t had time to adjust and take on board his ideas and instructions fully yet, and so time and patience will perhaps be needed to see the best of us this season.

As for the opposition, we’re unbeaten in our last four against Udinese, winning two and being held to two draws. Last season’s corresponding fixture ended in a 1-0 victory thanks to a dramatic late goal from Alessio Romagnoli.

Prior to that, we’d lost two of three meetings, and so it’s hoped that we can continue our more recent form and return home with all three points.

ROMAGNOLI’S WINNER FOR MILAN AGAINST UDINESE

As noted by MilanNews, via Sky Sport Italia, Lucas Biglia has emerged as a major doubt due to injury in a late blow for Giampaolo as he has used the Argentine stalwart in the deep-lying midfield role throughout pre-season.

That could push Hakan Calhanoglu into the regista role instead as the Turkish international has featured in that position at times this summer, as he has the tenacity and passing range to perhaps be effective as a short-term solution.

Should that change be needed, Lucas Paqueta could be deployed on the left of the midfield three, while the rest is to be expected with a familiar XI likely.

Theo Hernandez is ruled out through injury along with long-term absentee Mattia Caldara, while Leo Duarte, Ismael Bennacer and Rade Krunic haven’t featured enough in pre-season to suggest that Giampaolo will throw them straight in.

As for Rafael Leao, he could come in for Samu Castillejo as the second striker, while Franck Kessie will also perhaps push Fabio Borini for a place in the midfield three. 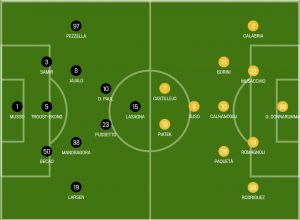 From an attacking standpoint, Udinese’s best bet and most likely approach will be to get their full-backs up on the flanks as well as looking for space in the channels and getting Rodrigo De Paul on the ball.

It’s questionable as to whether or not they have the quality and physical presence to outplay us through the middle, and so the likes of Ricardo Rodriguez and Davide Calabria will need to be switched on.

Furthermore, with the midfield likely to get congested, the pair will also need to ensure that they offer width to stretch the play and open up the option of a quick switch across the field to keep shifting Udinese’s organised and deep defensive set-up moving.

Castillejo has been poor in pre-season, and so it’s imperative that Suso and the midfield push up the pitch not only in their pressing to win possession back, but also to support Krzysztof Piatek and ensure that he isn’t left isolated.

Should Bigla be ruled out, it’s a pretty attacking midfield line-up that Giampaolo could go with, and so whether it’s Borini or Kessie, they’ll have to tuck in at times and offer some solidity and steeliness next to Calhanoglu to allow him to focus on releasing the ball quickly up the pitch to find teammates between the lines and get at Udinese before they can settle back into their shape and system.

Suso. While his inconsistency and lack of defensive work is often frustrating, the Spaniard has been a key figure in pre-season and will be the creative spark for us once again this season but in a more central role.

There have been promising signs that he can adapt to the No.10 role as he has found space between the lines and looked dangerous, while also scoring a couple of goals.

In turn, particularly with our new signings unlikely to feature from the start, it could be on a familiar face to provide the quality needed to break Udinese down and avoid it becoming a frustrating evening where we struggle to find a way through.