Milan will look to bounce back against Brescia on Saturday after their bitterly disappointing defeat to Udinese last weekend.

Despite positive signs in pre-season, Marco Giampaolo’s influence on the side appeared absent last time out, as it was an abject performance that lacked any real quality or change from last season.

There were troubling signs both in terms of the 4-3-1-2 system not working coupled with individuals not performing well enough, and ultimately it resulted in a defeat in the first game of the season.

As noted by La Gazzetta dello Sport, Giampaolo even conceded in his post-match interview that he could change his system after just one game as it doesn’t seem to suit key individuals, and the expectation is that the Italian tactician will make tweaks to his plans.

Samu Castillejo was largely ineffective through pre-season and disappointed again in Udine, while Fabio Borini has consistently shown a lack of quality in the final third to perhaps warrant a place in the starting XI.

Meanwhile, Suso was unable to have as big an influence in the trequartista role as he had this summer and Hakan Calhanoglu was poor as the deep-lying midfielder as he failed to dictate the tempo of the game and control possession.

In turn, it seemed relatively clear where the changes needed to be made, and Giampaolo is set to address those issues, as seen in the graphic below.

According to MilanNews, via Sky Sport Italia, Milan are set to change to a 4-3-3 system with Ismael Bennacer and Franck Kessie coming into the starting line-up for Borini and Castillejo.

Calhanoglu will be shifted forward into an attacking trident alongside Suso and behind Krzysztof Piatek, and so it’s hoped that will help get the best out of the Polish international by keeping him closer to goal and getting the service needed to find the back of the net rather than dropping deep or running the channels.

It remains to be seen if those changes secure a positive result in our first home game of the season, but based on what we saw last weekend, it should certainly result in an improved performance across the pitch.

Perhaps most exciting of all will be to see Bennacer make his full debut, as the 21-year-old looks a perfect fit for Giampaolo in the regista role.

It’s hoped that those around him provide the same level of quality to ensure that we pick up the right result and secure a morale boost ahead of the international break, while it could be crucial for Giampaolo too as he’ll be feeling the pressure having seen his ideal system and plans face an early setback. 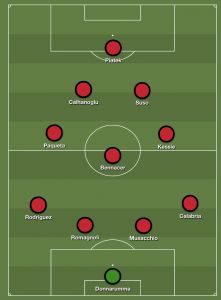