Milan host Brescia at San Siro on Saturday as Marco Giampaolo and the players look to bounce back from the poor result against Udinese last weekend.

The Rossoneri were bitterly disappointing last time out, as an abject performance led to the first defeat of the season with a need to now bounce back ahead of the international break.

SEE MORE: How Milan could line up vs Brescia: Two changes from Giampaolo, key tactical switch

Much has been said about a possible formation change given the problems that arose in that encounter, and so Giampaolo has a crucial decision to make already in terms of either sticking with his beliefs and preference or to adjust them to suit the players at his disposal and get the best out of them.

With Brescia back in Serie A, this is the first time that these two sides have met since 2011, with Milan securing six consecutive victories in their most recent meetings.

The last of which was a 1-0 win away from home, with Robinho bagging a late winner which helped us on our way to our last Serie A title.

We’ll be hoping that good run of form continues despite Brescia’s impressive 1-0 win over Cagliari away from home last weekend, and the indications as noted below are that Giampaolo will tweak his system slightly to more of a 4-3-2-1 or perhaps a 4-3-3, giving the likes of Suso and Krzysztof Piatek a chance to be deployed in more natural roles to ensure that they’re more effective.

On one hand, that’s a real concern as the Milan coach is essentially abandoning his planning in pre-season and his preference in terms of how he wanted us to set up.

In contrast, he’s perhaps going to be brave enough to admit that it wasn’t going to work and rather than persevere with it and allow the pressure to build on him and the players if it didn’t work again, he’s making the change now with the belief that he’ll get more out of his players.

Time will tell whether or not it is a sensible decision, as if we are able to pick up three points this weekend, it will certainly help forget about the disappointment in Udine.

With no suspensions or new injury concerns, long-term absentees Mattia Caldara, Theo Hernandez and Pepe Reina miss out, while Lucas Biglia remains a doubt after sitting out last weekend.

As for the visitors, former Milan star Mario Balotelli won’t feature due to suspension, while Emanuele Ndoj and Giangiacomo Magnani are expected to be sidelined by injury problems. Sandro Tonali will be one to watch with his ability to dictate the tempo in midfield with his passing ability, while Alfredo Donnarumma will be a threat up top.

In terms of changes, La Gazzetta dello Sport note that Giampaolo is expected to make two from the Udinese loss, with Ismael Bennacer coming in for his full debut, while Franck Kessie will replace Fabio Borini in midfield.

Hakan Calhanoglu will shift forward into a more advanced role to support Piatek, with Suso perhaps drifting to the right side rather than having to go through the middle as a trequartista.

In turn, that should still allow Giampaolo and the players to impose themselves on the game off the ball, while they have the technical quality and creativity in key areas to cause Brescia problems. 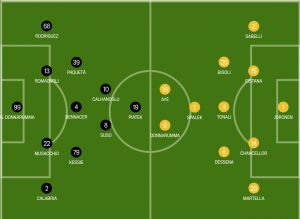 Ismael Bennacer. The Algerian international could prove to be the best of the summer signings given the importance of his role and the quality and potential that he possesses.

Albeit it was only a brief outing against Udinese, his ability to move the ball forward quickly and to find players in pockets of space between the lines with accurate vertical passes, he’s more than capable of setting the tempo and getting us ticking in possession.

On top of that, his intensity and tenacity off the ball to win the ball back will also be fundamental in midfield, ensuring that we impose ourselves on the opposition and make it difficult for them to get out of defence and pose any threat themselves.

Milan not only need to secure all three points this weekend but we must look good doing so in order to bounce back from the setback at Udinese. Bennacer will be key in ensuring that happens, but it will take a much-improved effort from all 11 players as we can’t see a repeat of last weekend.