Milan face a difficult trip to Verona on Sunday night as they look to build on the win over Brescia prior to the international break.

The Rossoneri did well to bounce back after the disappointment of losing our opening game against Udinese, but there is undoubtedly still plenty of room for improvement.

Having had a fortnight to work with the players who weren’t called up, Marco Giampaolo will have had crucial time to continue to get his ideas across and work on things to improve and develop the style of play that he’s trying to implement.

Time will tell whether or not he opts to make any changes from the side that faced Brescia, as he’ll have decisions to make considering players are stepping up their recoveries from injuries while deadline-day signing Ante Rebic will also be itching to get an opportunity.

As per MilanNews, it could be a familiar line-up from Giampaolo, with Samu Castillejo set to keep his place in the side alongside Krzysztof Piatek and Suso in an attacking trio.

Having tweaked his tactics slightly to switch from a 4-3-1-2 to more of a 4-3-2-1/4-3-3, it’s likely that Giampaolo will continue that way given the improvement seen in the performance against Brescia after failing to register a single shot on target in the Udinese loss.

The report above adds that Ismael Bennacer is expected to have Franck Kessie and Hakan Calhanoglu either side of him in midfield, while Theo Hernandez will remain on the bench as he continues his recovery from injury. 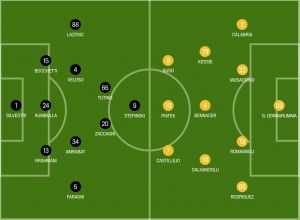 As seen in the graphic above, via La Gazzetta dello Sport, they’ve also gone with the same starting XI for Milan, which would suggest that Giampaolo will make just one change from the last game as Piatek comes back into the line-up at the expense of the recently departed Andre Silva.

While it’s perhaps to be expected that he won’t look to change too much, it will be slightly disappointing if he doesn’t reshuffle a little more with the likes of Hernandez, Rebic, Leo Duarte, Andrea Conti, Lucas Paqueta, Giacomo Bonaventura and Rafael Leao all set to be named on the bench.

How Milan should line up…

Admittedly, there are fitness concerns over several of those individuals and so that’s likely to be the fair reasoning behind keeping them on the sidelines for the time being. However, given the amount of quality in that list, it will be interesting to see if Giampaolo is tempted to change it.

According to MilanNews, Hernandez will be named in the squad but is expected to be left on the bench. However, if he’s given the green light to feature by the medical staff, it would be ideal to see him introduced  sooner rather than later to offer us more impetus down the left flank over Ricardo Rodriguez.

Pianeta Milan add that Duarte will continue to miss out behind Mateo Musacchio, while Paqueta, Leao and Rebic will all join him on the bench despite seemingly being in contention to start.

It’s a difficult balancing act for Giampaolo, and it’s expected that he will eventually make the desired changes when the individuals in question are fully fit and have had enough time to soak up the demands and instructions given to them.

Nevertheless, through a combination of the likes of Rodriguez, Castillejo and Musacchio offering limited contributions to the quality offered by those waiting to break into the XI, Giampaolo would be better off giving them a chance this weekend ahead of the Derby della Madonnina as he surely won’t risk any significant changes against Inter.

Then comes a tough trip away at Torino and so we could be heading into October and we still won’t have had a good look at some of the new faces added over the summer who will be keen to impress.

As noted in the reports above, it looks as though Giampaolo is going to go with the safe options. However, if the players are fit enough, they’re certainly good enough, and so it could turn out to be a real missed opportunity if we leave so many quality options on the bench in Verona albeit it would perhaps be a slight fitness gamble to bring them in now. 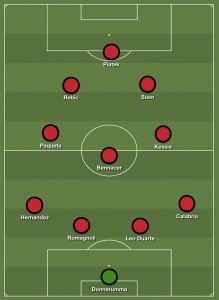