Milan face Inter in the Derby della Madonnina on Saturday night as city bragging rights are on the line with Marco Giampaolo hoping to pick up a major morale boost.

It’s been an unconvincing start to the season from the Rossoneri as despite picking up wins over Brescia and Verona in our last two games and conceding just one goal in our opening three outings, we haven’t yet played to the level hoped for after Giampaolo’s arrival this summer.

In contrast, Inter have a perfect record with three wins in three thus far, conceding just one goal while scoring seven. They did slip up in midweek though as they dropped points at home to Slavia Prague in the Champions League.

Whether or not the hangover from that lingers until Saturday remains to be seen, but Antonio Conte will undoubtedly have his men ready for a scrap with quality across the pitch which makes it a difficult challenge for Milan at this early stage in the campaign.

Recent history in this fixture doesn’t make for positive reading as Milan have lost three of the last five Serie A meetings along with two draws. The last time we won a league meeting against Inter was in January 2016, a 3-0 victory with goals from Alex, Carlos Bacca and Mbaye Niang.

Goals are almost a guarantee when the two sides meet though, with just two goalless meetings in the last 36 encounters across all competitions and so that would suggest that there will be plenty of entertainment on show.

Form book generally goes out the window in derbies, and so it’s hoped that we can step up to the occasion and raise our game to secure all three points.

Davide Calabria is suspended after his late red card in Verona, while Mattia Caldara remains sidelined through injury. Pepe Reina is expected to be named in the squad after his recent injury layoff.

As for Conte, he has no suspensions to be concerned with and no notable new injury issues which means he’ll have a full strength squad to choose from.

The expectation is that Andrea Conti will come in to replace Calabria in a like-for-like switch at right-back, while the only other change from the win over Verona will see Ismael Bennacer come back in for Lucas Biglia in the regista role.

Theo Hernandez, Samu Castillejo and Ante Rebic are perhaps knocking on the door for a place in the starting line-up, but as per La Gazzetta dello Sport in their graphic below, it seems as though Giampaolo will look to stick with what he went with last time out for the most part. 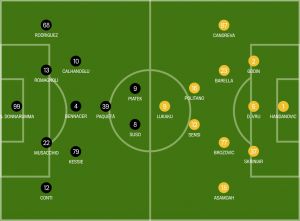 Krzysztof Piatek. Having finally ended his goal drought against Verona, it’s hoped that our prolific marksman has had the confidence boost he needed to regain his form.

This could potentially be a tight game, and so it’s imperative that he’s at his clinical best to take his chances as it could be a long, difficult night for him up against a solid back three.

He’ll certainly need support from his teammates and the right service, but there is a feeling that if Piatek isn’t able to fire, then we could continue to struggle for goals as ultimately Inter will look to frustrate us and use the quality that they have in the final third to make the difference.