After the disappointment against Inter, Milan must respond and bounce back despite facing a difficult trip to Turin to take on Torino on Thursday night.

The Rossoneri have won two and lost two in four Serie A outings thus far while scoring just two goals in those games, and so there are question marks hanging not only over the results but also our performances to date.

SEE MORE: Why these six Milan stars must get bigger roles from Giampaolo

Marco Giampaolo will undoubtedly be feeling some early pressure as things haven’t gone to plan, and he is arguably leaving himself open to criticism from pundits and fans alike with some of the decisions he has made with his starting line-up so far this season.

With that in mind, it’s imperative that he gets it right in midweek to ensure that we don’t suffer further disappointment as it will ultimately lead to more nerves and anxiousness over whether or not he’ll be able to get over a difficult start and turn things around.

As he did against Bayern Munich in pre-season before he suffered his injury setback, Theo Hernandez impressed in his cameo appearance against Inter last weekend with his intent on and off the ball to offer more urgency defensively and a real threat going forward on the left flank.

Having now overcome that injury blow and gotten minutes in his legs, there is arguably no reason at all why Ricardo Rodriguez should now start ahead of him, with the Swiss international greeted by jeers and whistles as he left the pitch on Saturday night.

While the above was one of Giampaolo’s biggest mistakes on the night, another was starting Lucas Biglia ahead of Ismael Bennacer in the heart of the midfield.

The 21-year-old was perfectly suited to that game given the high tempo and frantic pace at which it was played, as he could certainly have offered more of a presence in midfield off the ball while doing more in possession to keep us ticking and have some sort of control on play.

Biglia has his qualities and is vastly more experienced, but if last weekend told us anything, it’s that Bennacer must start if he’s available and in good form.

As noted by La Gazzetta dello Sport, Lucas Paqueta is expected to miss out against Torino due to injury, and so the likelihood is that Giampaolo will stick with Hakan Calhanoglu on the left of the midfield three.

In turn, that leaves a spot open in the final third assuming that both Suso and Krzysztof Piatek are both kept in the starting XI.

We’ve been through what Samu Castillejo can, and perhaps can’t, offer in that department through pre-season and the start of this campaign, and so one of Leao or Rebic must get the nod against Torino.

Leao impressed in patches against Inter with his pace, movement and directness to take on players, but Rebic can offer similar threats and has the experience and maturity at a high level to perhaps be trusted more. Nevertheless, one or the other must start.

Naturally, much depends on the how the game is playing out and what certain individuals have looked like in training through the week.

However, should the changes above be made, that still leaves the likes of Rade Krunic and Giacomo Bonaventura on the bench, and it’s arguably time that they started to get some minutes to work their back to full fitness and potentially even towards a prominent role.

MilanNews note that Krunic is possibly in contention to usurp Franck Kessie in the XI, while MilanNews also add, via Tuttosport, that Bonaventura is in good shape and is itching to get back involved.

Ideally, we’ll be in a commanding position as the game goes on and Giampaolo will be comfortable to introduce the pair. Nevertheless, even if it’s to unlock the Torino defence and try something different which we haven’t yet seen this season, it could be worth consideration.

Davide Calabria will likely come in for Andrea Conti at right-back having served his one-match suspension while his teammate struggled against Inter in his absence, and that will hopefully add to what is needed to get all three points against Walter Mazzarri’s side on Thursday. 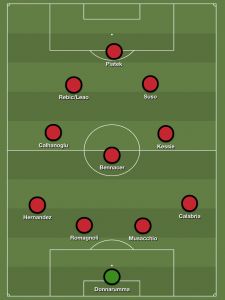