After four defeats in six Serie A games, Milan and Marco Giampaolo head to Genoa this weekend knowing that they must get a positive result.

The pressure is undoubtedly building on the Italian tactician, as he’ll be fully aware that he must start delivering both performances and results in order to avoid seeing his position become even more precarious.

SEE MORE: Three things Giampaolo must do to get Milan out of early crisis and save his job

Despite positive signs in the first half against Torino, the Rossoneri slipped up and fell to defeat and were dire in the loss to Fiorentina at the weekend which piled on further misery in what has been a desperately poor start to the campaign.

Giampaolo can’t afford to get his selections wrong on Saturday night, as if he does, it could end up costing him his job as the Milan hierarchy surely won’t be able to stick by him if we continue to show no sign of improvement and fail to offer answers as to how we turn things around.

Leo Duarte in for suspended Musacchio

As noted by MilanNews, the expectation is that Leo Duarte starts against Genoa with Mateo Musacchio ruled out through suspension after being sent off against Fiorentina.

The Brazilian looked switched on defensively when he came on for his debut, although there were signs of rustiness given his lack of playing time.

The report above notes that Matteo Gabbia could be a surprise starter, and although he did impress during pre-season this past summer, Duarte must surely get the nod and Giampaolo must show faith in him to build his confidence and potentially build a solid partnership with Alessio Romagnoli until Mattia Caldara comes back.

After being hauled off at half-time against the Viola, could Kessie now be in danger of losing his place in the starting XI? The 22-year-old offers key qualities in midfield with his energy and tenacity, but his lack of quality on the ball is hurting us and can’t be ignored any longer.

Similarly to Duarte, Krunic will need time to get up to speed and find his best form, but having been snapped up this past summer as an ideal addition for Giampaolo, he could get a chance to prove his worth.

Energetic off the ball to press and win possession back, his technical quality on the ball will potentially set him apart from Kessie and add a different dynamic to our midfield.

Eventually, enough is enough. Suso is a classy individual and he certainly has his moments and has been pivotal for us in recent years. While Calhanoglu hasn’t been as decisive, he’s also been a reliable figure for various coaches.

However, they simply aren’t producing enough given their crucial roles in the side and whether it’s slowing play down, sloppy work to surrender possession or an air of predictability which blunts their attacking threat, they have failed to deliver so far this season.

The likelihood is that Giampaolo will stick with his core players. If he goes with Calhanoglu and Suso again and they don’t stamp their mark on the game this weekend, it could be a hugely costly mistake from the Milan coach.

As per MilanNews, via Sky Sport Italia, there is already concern that Giampaolo will react to last weekend and bring Ricardo Rodriguez and Lucas Biglia back in for Theo Hernandez and Ismael Bennacer respectively.

That’s not a reassuring sign in itself as he’s perhaps tempted to play it safe and bring in what he perceives are solid, experienced options who will do a job and try and grind out a win.

If it works, it should be commended as we all want to see Milan succeed this season without having to change coach yet again. However, there are certain changes that Giampaolo shouldn’t make, and those are arguably two.

Elsewhere, it’s hoped that Krzysztof Piatek isn’t dropped and continues to lead the line as if we’re to succeed this year, we need to get him firing again. Add energy, intent and desire around him with the pace and movement of Rafael Leao and Ante Rebic, and perhaps we’ll be moving in the right direction.

Lucas Paqueta must start to add some more creativity and technical quality to complement what that duo offer, while bringing Giacomo Bonaventura off the bench might be needed and should be the first port of call for Giampaolo.

It remains to be seen what the under-fire Milan coach goes with, but if he’s not careful, this could be the last time he’s picking a starting Milan XI.

How Milan should line up… 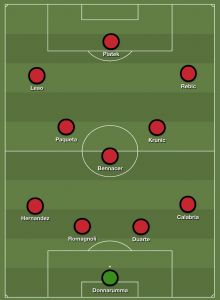