Milan will face Lecce next Sunday night in Stefano Pioli’s first game in charge, and the new Rossoneri boss has crucial decisions to make.

From the tactical uncertainty under Marco Giampaolo to several key individuals letting him down and not producing despite him showing unwavering faith in them, a combination of factors ultimately led to his early dismissal last week.

SEE MORE: Five Milan players who Pioli should avoid relying on given risk of failing to deliver

It will be vital for Pioli that he learns the lessons from his predecessor’s tenure and doesn’t repeat his mistakes, while simultaneously trying to implement his own ideas and strategy.

In turn, it will be intriguing to see what his preferred system and personnel is, as given the difficult run of fixtures ahead, Pioli will be desperate to get off to a winning start and ease some of the pressure on his shoulders.

As seen in the image below, via La Gazzetta dello Sport, the early suggestions are that Pioli will adopt a 4-3-3 against Lecce, while it will largely be a familiar and expected starting XI. 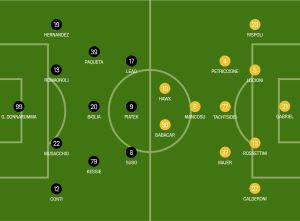 Time will tell whether or not it’s accurate, but it’s undoubtedly the safe option from the Milan boss as he would be using a system that the players know well and are arguably most comfortable in with individuals who have been consistently named in the line-up.

It’s a fair starting point in truth as Pioli won’t want to come in and rip everything up and start from scratch, and given his need for a positive start, this could be the sensible decision especially coming off the back of an international break in which he hasn’t had a chance to fully work with a number of key players.

However, the 4-3-3 is a tried and tested system that hasn’t brought us the results desired over the long run, and so it could be worth trying to stamp his own mark on the side and implement a 4-2-3-1 formation which he has previously used during his coaching career.

The reason for that is that he has the players at his disposal who could fit that system really well, beyond an expected backline consisting of Gianluigi Donnarumma, Andrea Conti, Mateo Musacchio, Alessio Romagnoli and Theo Hernandez vs Lecce.

Franck Kessie and Ismael Bennacer could arguably be an ideal duo in front of the defence to provide defensive cover as well as energy, tenacity and an ability to break forward with powerful, driving runs while  the other stays back and guards against the counter-attack.

Further up the field, a creative duo of Giacomo Bonaventura and Lucas Paqueta coupled with the pace and directness of Rafael Leao to stretch defences and to add a different dynamic in the final third could be key, with Krzysztof Piatek leading the line and pushed closer to goal where he does most, if not all, of his damage.

The preferred XI below would see Mattia Caldara come in when fully fit, with MilanNews noting last week that he has now rejoined the rest of the group in training and could be pushing for a place soon enough.

Further, Bennacer would get the nod over Lucas Biglia, although given Pioli knows the latter well from their time at Lazio, there’s a risk he could lean on him again at Milan with his experience in mind.

Elsewhere, Paqueta and Giacomo Bonaventura should come in for the underwhelming pair of Hakan Calhanoglu and Suso as their flair, technical quality and intelligence on the ball could make us a less predictable attacking unit.

In reality, it’s unlikely that Pioli will make so many changes, particularly in the first few weeks as he’ll perhaps rightly try to see if his methods get the best out of players who have been underperforming but are still considered influential figures in the side.

However, it’s hoped that the changes above are considered moving forward, as a 4-2-3-1 will surely add balance to the XI with plenty of creativity and attacking threat while also having the legs in midfield to guard against counter-attacks and help us impose ourselves on games to get a foothold and dictate play.

Milan have managed to score just six goals in our opening seven Serie A games, the joint-worst tally of the top 13 sides in the standings. In turn, if the 4-3-3 continues to fail, Pioli would be well advised to switch things up and impose his own style and ideologies on the squad and try a 4-2-3-1, but only if he’s willing to fully commit to it and stick with it rather than backtracking like Giampaolo did with the 4-3-1-2 after just one game. 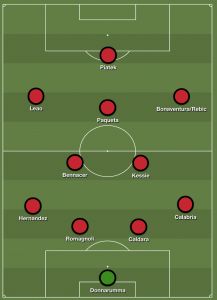