Stefano Pioli’s tenure as Milan coach begins on Sunday night as the Rossoneri host Lecce at San Siro, and there will be plenty of intrigue over his starting XI.

The expectation is that the 53-year-old won’t take any major risks with his line-up and we will potentially see a similar XI to that seen in Marco Giampaolo’s brief stint in charge.

Naturally, this will earn him a mixed response from fans as he won’t be able to make everyone happy with his selections, but there are key decisions to make and possible last opportunities for certain individuals to make an impression or risk being ditched by the new Milan boss.

Milan spent big on the duo in January, and the initial results were positive as Paqueta added much-needed flair, creativity and excitement to our midfield while Piatek was a clinical presence up front.

It hasn’t quite clicked for the pair so far this season, but it’s hoped that Pioli is ready to hand them key roles immediately to instil some confidence in them and make them pivotal parts of his plans moving forward.

Paqueta’s quality in possession coupled with his tenacity off the ball make him an ideal selection over Hakan Calhanoglu in the mezzala role, although MilanNews suggest that there are doubts over whether or not Piatek will be named in the starting line-up.

It certainly has been an underwhelming start to the season for the Polish international as he continues to wait for his first goal from open play. However, key to ensuring Pioli’s stint is a success is finding a goalscorer who can consistently deliver, and Piatek is arguably his best bet.

Decision to be made on Suso

If Suso produces a decisive performance this weekend and earns his place in the line-up, then calls for him to be dropped will rightfully lessen.

However, that is a huge if at this stage given his inconsistency and frustrating performances so far this season, and so he needs to start feeling the pressure of his place in the side being under threat.

As seen below, every touted line-up has the Spaniard starting in his usual role on the right side in a possible 4-3-3. Given that is where he has been most effective for Milan, it’s time for him to deliver a top performance or finally risk being dropped, assuming Pioli is prepared to make such a big decision if he doesn’t get the response he’s after.

Hakan Calhanoglu could be at risk of being dropped, and so perhaps that’s the first sign that Pioli will look to shake things up if key individuals aren’t delivering, 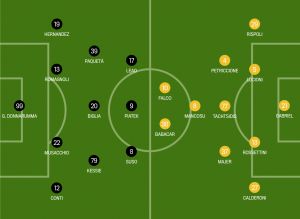 As seen above, Lucas Biglia is expected to get the nod in the heart of our midfield, with Pioli evidently trusting him having worked together at Lazio.

The 33-year-old has his strengths and is still an important option to have in the squad, but there is surely a very thin argument in favour of him starting ahead of Ismael Bennacer.

The Algerian international is a bundle of energy, tenacity and technical quality and brings some much-needed impetus and urgency to our midfield. While Biglia is still capable of playing a key role, Bennacer has to be the long-term fixture in the XI.

Further, while Giacomo Bonaventura is continuing his recovery from injury and Ante Rebic hasn’t had enough chances since his summer arrival, it’s hoped both men continue to get playing time off the bench to make an impact and be given a chance to prove their worth.

If things aren’t working against Lecce, it’s hoped we see them and such changes are made swiftly to give them enough time to have an influence, but these three need to be playing more as they’ll surely make a positive impact if given a proper opportunity.

Elsewhere, Andrea Conti will come back in for the suspended Davide Calabria, while it could be argued that Leo Duarte can rightly feel hard done by if he drops out at the expense of Mateo Musacchio who returns from a suspension of his own.