After positive signs against Lecce, Milan fell to defeat to Roma last time out as Stefano Pioli and his men need to get it right against SPAL on Thursday night.

The loss at the weekend now leaves us down in 13th place in the Serie A table, seven points adrift of fourth spot, and so we simply can’t afford another slip up this week.

SEE MORE: Five key talking points as Milan fall to defeat at Roma in major step back under Pioli

Particularly given the opposition and the fact that we’re at home, this is a game we must dominate and win, as we need to see more of the positives against Lecce and less of the costly mistakes at Roma.

Prior to Pioli getting the job, many would have perhaps argued that he couldn’t afford to make the same mistakes as his predecessors in terms of selections. While he has got a reaction out of certain individuals, others have continued to disappoint and so changes must now be made.

No more Conti, Calabria at right back

Whether it’s getting sent off every other game or make costly errors which lead to goals, Davide Calabria is making too many mistakes too often. Sadly, the man providing competition for him has looked a shadow of the player he was at Atalanta with Andrea Conti struggling in defence and going forward.

In turn, while it’s undoubtedly preferable to have a natural right-back in that position, at this point we might be better off with Fabio Borini, or Leo Duarte filling in as suggested by La Gazzetta dello Sport. 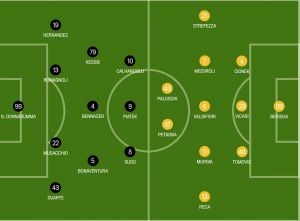 While Theo Hernandez has seemingly sorted out the left flank, we’ve fallen apart down the right and so something has to change before it costs us more points. As we shift into a back three when Hernandez attacks anyway, bringing Duarte in to be that third man could be a solution as he’s competent enough on the ball to be able to build out from the back when required too.

Bennacer in, Biglia out

It’s sadly becoming repetitive, but Lucas Biglia can’t win midfield battles. His experience can be vital and his protection of the defence at times is priceless, but we’re talking about moments within games rather than a consistent performance over 90 minutes.

Ismael Bennacer has the energy, intensity, urgency and technical quality to grab a game by the scruff of the neck and to play passes that lead to something. While he has been sloppy at times, we’re only making it more difficult for him to find that sharpness and quickness in possession by limiting his playing time.

Give him a run of games and it’s surely going to be enough for him to prove that he deserves that spot in the starting XI.

Bonaventura, Rebic, Castillejo or Leao instead of Suso

At this point, it’s just simply a case of trying other things and seeing what works. Week after week we’ve seen Suso fall short this season, and he has done little to warrant that starting berth.

The Spaniard may well be one of the most technically gifted players in the side and most creative, but this is about form not quality, and he simply hasn’t delivered this year while his predictability is becoming painful to watch at times given his lack of confidence.

In turn, it’s about time we saw something different whether it’s Giacomo Bonaventura, if fit, alternating with Hakan Calhanoglu, Ante Rebic given a chance to overcome a poor start or one of Samu Castillejo or Rafael Leao to add some impetus and pace to the side.

Leao looks bright and talented enough to play across the front line and while it may not be his preferred position, he can arguably do a decent job on the right flank still by being direct, getting to the byline and providing service for others.

Goals needed, get Piatek back in

Let’s keep this as simple as possible. We’ve scored just nine goals in nine games. We have a player in Krzysztof Piatek who scored 30 goals in 42 appearances last season.

Admittedly, he’s not been in great form since pre-season and question marks are rightly being asked over whether or not he is a one-season wonder and if the hype was unwarranted.

However, if Pioli is going to discover a consistent source of goals, his best bet is to look for the Polish international, find a system and style of play that allows him to flourish and allow him to get back to doing what he does best. Easier said than done, but it’s surely the most sensible option to start scoring goals with a marksman capable of delivering 20+ goals a season.

Crucially though, it’s only going to work if we play to his strengths and give him the service he thrives on. Otherwise, we’ll see him cut a frustrated figure and patience run out if the goals continue to dry up.