Milan face a tough test against Lazio at San Siro on Sunday night as we look to make it back-to-back wins after seeing off SPAL on Thursday.

While it was a relief to secure all three points in midweek, what that performance also made clear was that we’ll have to improve significantly if we’re to take anything from our next three outings against Lazio, Juventus and Napoli.

SEE MORE: How Milan ace has shown class on and off the pitch but must continue to deliver

There will perhaps be a temptation for Stefano Pioli to make changes given our struggles to break SPAL down, but they should arguably be limited as we need to not only find some stability and familiarity in the line-up, but also to give certain key players a run of games in the side to discover their best form.

Chopping and changing each week based on one below-par performance isn’t going to help, but such is the level of pressure and scrutiny on Milan, it remains to be seen if Pioli decides to go with more experience as suggested in the graphic below. 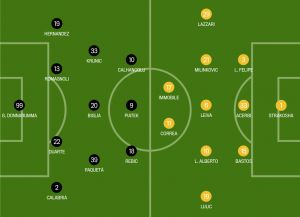 As per MilanNews, Mateo Musacchio picked up a problem in the win over SPAL, putting his participation in the clash with Lazio in doubt.

In the event that he does miss out, Leo Duarte should get the nod in a more natural role for him having started at right-back last time out, with the Brazilian impressing in the second half after Musacchio was substituted.

That in turn leaves a slot open on the right side of the backline, and with Andrea Conti continuing to struggle, Davide Calabria will perhaps be considered the safer bet despite his own problems so far this season with discipline after two red cards.

Ismael Bennacer didn’t have one of his better games against SPAL, but surely the only way we’ll see the best of the 21-year-old is if he’s given a run of games to improve his fitness and sharpness.

By constantly bringing him in and taking him out of the XI, he has no continuity and no real opportunity to get settled in the side, and so it’s hoped that he doesn’t face being dropped this weekend.

Coupled with the fact that we know what we get from Lucas Biglia in terms of his inability to win midfield battles and impose himself on games, it could be a costly mistake from Pioli.

As for Franck Kessie, it’s perhaps time to now drop him and hope that gets a reaction out of him, as he has been struggling to produce his best form this season too. While his lack of composure and quality in the final third is nothing new, he has struggled with the basics that he is usually so effective with in terms of his physicality and winning 50/50 battles.

With Rade Krunic sitting on the bench offering depth this season, the summer signing deserves a chance to try and impress Pioli and show us what he can offer over 90 minutes.

The decision to hand Samu Castillejo a rare start didn’t work in midweek, but dropping Suso seemingly did as he produced a moment of magic to seal the win over SPAL.

However, on the eve of the game, MilanNews have reported that the Spaniard has picked up an injury and isn’t expected to be involved, with Castillejo tipped to get the nod again while GdS above give it to Ante Rebic.

As we saw in pre-season and with just four goals and four assists in 44 appearances for Milan, the 24-year-old has struggled badly to deliver for us and so especially against a well-organised and solid unit like Lazio, it would come as no surprise if he struggled again.

With that in mind, if fit enough, Giacomo Bonaventura should surely get a chance from the start and whether it’s alternating with Hakan Calhanoglu on the flanks or simply being deployed down the right to support Krzysztof Piatek, it will ask more questions of Lazio and give us a different dynamic and some unpredictability instead of seeing Castillejo potentially toil yet again.