After opting for a coaching change last month, the decision to bring in Stefano Pioli to replace Marco Giampaolo hasn’t had the desired impact for Milan.

The 54-year-old has lost two games, to direct rivals Roma and Lazio no less, been held to a draw by Lecce while picking up a narrow win over SPAL.

That’s not the form that would give us hope of being able to cut what is now an eight-point gap between ourselves and fourth place in the battle for Champions League qualification.

Although Pioli has swapped personnel, he has been consistent in adopting a 4-3-3 system thus far, and while it certainly has its benefits and suits certain individuals, perhaps the time has come to now make a change and try a different solution.

Giampaolo was criticised during his tenure for persisting with the same formation that simply wasn’t working with key figures failing to be as influential as we needed them to be.

With that in mind, it would be wrong to not pull Pioli up on the same issues and given the way in which we continue to concede poor goals and struggle to find the back of the net, something must change in the balance of this side to ensure we’re more effective at both ends of the pitch.

According to Goal Italia, Pioli is now considering a switch to a 3-4-2-1 system, with the XI below touted as one that could be seen against Juventus this weekend.

Why the system could work

This particular formation could have a hugely positive impact on our performances. A three-man defence would surely help us shore things up at the back having conceded 15 goals in 11 league games thus far.

With more organisation and simply more of a presence in defence when out of possession, if implemented correctly, it could lead to us becoming much more difficult to break down and less vulnerable to the counter-attack.

Further, Mattia Caldara is expected back from injury in the coming weeks, and having predominantly played in a back three during his successful stint at Atalanta, it’s a backline that he could flourish in while Mateo Musacchio’s technical quality could be useful with his defensive weaknesses better covered.

Andrea Conti could relish a wing-back role to allow him to showcase his attacking quality and limit the question marks being raised over his poor defensive work so far this season, while Ismael Bennacer in a double pivot with a more defensive-minded midfield partner could allow him to be a box-to-box live-wire in the heart of the side.

On the opposite flank, Theo Hernandez could continue to shine in attack and have less defensive duties to be concerned with, while with genuine width being provided from the wing-backs, Hakan Calhanoglu and Lucas Paqueta could try to do more damage through the middle and offer real creativity and service in and around Krzysztof Piatek up front.

There’s a lot to like about the touted system, but ultimately until we see it deliver results on the pitch, we won’t know whether or not the players will respond and put in better performances to start winning games on a consistent basis.

If Pioli does make the change, he has to get his personnel and selection decisions right, otherwise the same issues could arise regardless.

Caldara’s return is key along with Musacchio as concern could be raised over Leo Duarte and Ricardo Rodriguez given the lack of awareness, concentration and pace that they’ve shown to date.

Further, the likes of Conti, Biglia, Kessie, Paqueta and Piatek would have to respond, otherwise combined with their struggles so far this season already in a 4-3-3, they could be at risk of being dropped from the line-up.

While that opens the door for others to stake a claim to be named in the XI, Milan need stability and familiarity in a system that works for the collective as we simply can’t afford to keep chopping and changing with little room for slip-ups left this season.

Pioli will have alternatives as ideally Rade Krunic and Giacomo Bonaventura will find space in his plans with his possible formation switch too, but time will tell if he firstly makes the change this Sunday and if it delivers the results we’re all seeking particularly when we have a fully-fit squad to choose from. 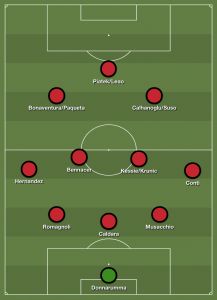