With Milan in desperate need of a positive result, it doesn’t get much more difficult than a trip to face Juventus on Sunday night.

The Rossoneri have won just one of Stefano Pioli’s first four games in charge, a run of results which has contributed to us slipping down to 11th place in the Serie A table with just 13 points from our opening 11 league outings.

SEE MORE: How change to new formation could be smart move from Pioli to overcome Milan struggles

With an eight-point gap to now wipe out to fourth place, we simply can’t afford to fall further behind. However, it’s easier said than done taking points off the reigning Italian champions at home, and the first big decision that Pioli has to get right is his starting XI. 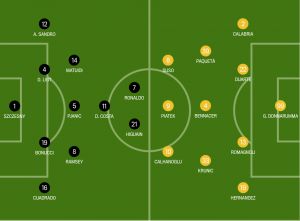 Too risky to change formation vs Juve

As noted by Goal Italy, there had been suggestions this week that Milan could switch formation and adopt a 3-4-2-1 system. While that certainly has its strengths, the idea of trying it out for the first time with this group of players under Pioli away at Juventus doesn’t sound like such a smart idea.

That said, the tried and trusted 4-3-3 hasn’t exactly brought us great results thus far and so perhaps a change that gives us more defensive solidity and direction in attack would be the right way to go.

Nevertheless, it would come as no real surprise if Pioli stuck with it for the time being, and so it could ultimately result in a familiar XI which isn’t such a bad thing when trying to build stability and getting more out of the core players who have shown signs of improvement as a collective under Pioli.

Pace in attacking play will be key, start Bennacer & Krunic

Juventus have struggled at times at home against a side that can break quickly and has pace on the counter attack to exploit spaces left behind.

That would suggest that Theo Hernandez could be pivotal down the left flank, while it’s imperative that we have Ismael Bennacer and Rade Krunic start in midfield.

The duo can not only break forward with pace and intent in possession, but they have the technical quality to move the ball forward quickly and avoid slowing the tempo of the attack down and giving Juventus a chance to get numbers back and get into their defensive shape.

We’ve seen that all too often from Lucas Biglia, while Franck Kessie’s lack of composure and poor finishing in the final third could be costly as he’s managed just 13 goals in 106 appearances for Milan. In turn, the summer signings should get the nod.

With the above point in mind, the same applies for Rafael Leao with his ability to use his pace and trickery in wide positions to cause defences problems.

As we saw against Lecce, he arguably doesn’t have the clinical edge to his play in front of goal yet to warrant starting as our No.9. In turn, that role should be left with Krzysztof Piatek, and instead Pioli should utilise Leao’s speed and threat down the left flank.

As noted by MilanNews, via the paper edition of La Gazzetta dello Sport, Suso is expected to be available after overcoming a muscle injury, and so with Hakan Calhanoglu being a steady presence in the line up since Pioli took charge, it comes down to who he prefers as the third piece in his trident.

Switch Calhanoglu across and allow him to tuck inside and offer Davide Calabria help defensively, while putting in Leao on his favoured left flank with Piatek through the middle. It’s certainly not going to be easy, but the XI below would surely be best placed to get into Juve’s face and play with the necessary intensity and tempo to cause them problems.

That is what we can hope for and then the result will potentially follow. Pioli should arguably much prefer to see that as opposed to returning from Turin following an uninspiring and abject performance where we failed to really trouble the Bianconeri and approached the game in a way that suited them to dictate proceedings.