The international break is finally almost over as the countdown continues until Milan’s encounter with Napoli at San Siro on Saturday.

After the disappointment of losing away at Juventus almost a fortnight ago, it’s been a long wait for the Rossoneri to attempt to bounce back and start to climb the Serie A table.

While we’re currently down in 14th place after 12 games, we’re only six points behind Napoli as Carlo Ancelotti has had his troubles so far this season this too, and so this weekend’s showdown is potentially crucial moving forward.

With games against Parma, Bologna and Sassuolo to follow, it’s hoped that Milan can now put some sort of winning run together to finally start building some momentum. While the performances have certainly improved since Stefano Pioli stepped in to replace Marco Giampaolo, results have unfortunately failed to follow.

In turn, it’s pivotal that we get off to a positive start against Napoli after the international break, and Pioli’s decisions will undoubtedly be crucial.

With Hakan Calhanoglu and Ismael Bennacer suspended, there will be two enforced changes for Milan.

Biglia is arguably nailed on as he is a straight swap for Bennacer in that holding role in front of the defence, while it’s a little less certain who will get the nod on the left flank.

Rafael Leao has been preferred at times by Pioli while Ante Rebic has been used sparingly. According to Sky Sport Italia, as reported by MilanNews, the Croatian international has been tipped to get a starting berth on Saturday.

We’ve barely seen Rebic since he joined us this past summer, but when he has featured, he has struggled to get going even in lengthier outings against Verona and Lazio. While we’ve got to find a way of getting a contribution from him this season, this game surely isn’t the right time.

As noted by La Gazzetta dello Sport, Pioli wasn’t overly impressed with Leao after his substitute appearance against Lazio, and so unless his attitude is spot on and he’s raring to go, he could face being snubbed this weekend.

That leaves Giacomo Bonaventura, if fit, to be the ideal choice to be given the opportunity to not only build his fitness and get much-needed minutes under his belt, but also to showcase the quality that he still has which he must start to show on a regular basis to help us improve and secure his long-term future.

With 31 goals and 16 assists in 157 appearances for Milan, the 30-year-old has been one of our most important figures over the years, but injuries have blighted his career in more recent times.

Having made five appearances so far this season, it’s hoped he gets a sixth outing on Saturday and puts in a top performance to prove like Andrea Conti did against Juventus last time out that there’s still plenty of life left in him to make an impact.

Meanwhile, Krzysztof Piatek has also struggled so far this year with just three goals in 12 games. It’s still a firm personal belief that for Milan to start moving up the table, the Polish international has to be the man to fire us up there. The quicker that Pioli can solve his attacking issues and get the prolific Piatek back, the sooner we’ll be moving in the right direction again.

Conti, Krunic must now look to cement places in XI

Rade Krunic, Biglia and Lucas Paqueta are expected to get the nod in midfield, with Bonaventura, Piatek and Suso likely to form the attacking trident, as noted by La Gazzetta dello Sport in their graphic below.

That means Conti will get an opportunity to build on his impressive outing against Juve as he finally showed that he is capable of shaking off the rust and replicating his Atalanta form, while Krunic appears to have surpassed Franck Kessie in the pecking order.

While he hasn’t quite been stand out in terms of his impact on the team, the former Empoli ace adds the energy and tenacity that Kessie offers, but is capable of pairing that with technical quality on the ball.

We’ll hopefully see more of that as the weeks go on as Milan need goals and creativity from midfield to lessen the burden on the front three, and Krunic could be the man to provide that if he can step up and start to really cement his place in the starting XI.

Gazzetta have arguably got it spot on with this line-up, but time will tell if Pioli agrees this is the right group of players to secure all three points this weekend. 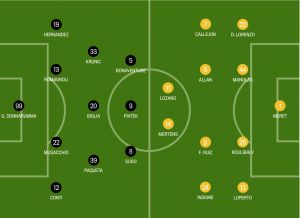