Milan face an important clash with Parma on Sunday and changes to the line-up are expected from Stefano Pioli after the draw with Napoli.

The Rossoneri have an opportunity over the next three weeks to start closing the gap on the top four in Serie A as they face Parma, Bologna and Sassuolo leading up to Christmas.

While our form so far this season would suggest that those are anything but straight-forward wins, they are certainly still winnable games on paper and Pioli will know the importance of building some momentum and putting a winning streak together.

In turn, he’ll hopefully get his team selection right to have the most effective players on the pitch on Sunday, and that could revolve around three crucial changes.

Suspended duo to come back in

Ismael Bennacer and Hakan Calhanoglu were both absent from the draw with Napoli due to suspension, but both should come straight back into the XI.

While Lucas Biglia started relatively well last weekend, the midfield stalwart faded badly as he so often does as the game went on as he gradually became an onlooker in the midfield battle.

Bennacer offers more energy, mobility and technical quality on the ball, and so it would seem like a pretty simple decision for Pioli to bring the 21-year-old back into the mix immediately.

Meanwhile, according to Sky Sport Italia, as noted by MilanNews, it’s been suggested that Lucas Paqueta isn’t 100% fit, and so he may well miss out on a starting berth this weekend.

With Calhanoglu improving since Pioli took charge, he will likely come back into the XI too but a decision will be needed on whether he’s simply a straight swap for Paqueta in midfield, or if he switches places with Giacomo Bonaventura on the left flank.

Given the Italian playmaker’s impact last weekend in a more advanced role on the left side in the final third, it may well be the sensible move to leave him be, and give Calhanoglu a chance to showcase his ability in a midfield role.

After pulling out late just ahead of kickoff last weekend, Suso is expected to be back in contention this weekend and it’s highly likely that he will replace Ante Rebic on the right flank.

While the Croatian international is struggling to adapt and also picked up a knock against Napoli which affected his performance, he isn’t quite having the impact needed as he looks short of confidence and full fitness at times.

It’s hoped that he does turn things around and becomes a valuable asset for Pioli, but on the basis of last weekend, it’s hard not to see Suso coming back in if he’s passed fit.

The Spaniard has struggled to hit top form so far this season, but in a game where we’ll look to try and claim the lion’s share of possession, his creativity and technical quality on the ball must help make the difference in the final third and unlock the Parma defence.

Elsewhere, Andrea Conti and Rade Krunic are perhaps under pressure from Davide Calabria and Franck Kessie respectively for a starting berth, but the pair have performed well in the last two games and should keep their places in the XI for another week. 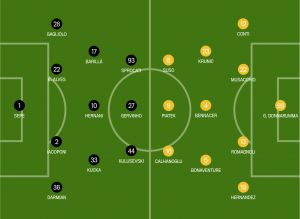