Milan face a trip to Bologna on Sunday night as Stefano Pioli and his men look to build on the win over Parma last time out to start putting together a winning run.

The Rossoneri still sit down in 11th place in the Serie A table after 14 games, 11 points adrift of fourth spot as we face a big challenge in wiping that deficit out and getting back into the mix for a Champions League qualification spot.

SEE MORE: Four key reasons why bringing Ibrahimovic back would be ideal move from Milan

Nevertheless, we can only really approach it one game at a time at this point, and this weekend we face another winnable game on paper but we must produce a solid performance at both ends of the pitch to come away with all three points.

Both Suso and Franck Kessie were named in the starting XI against Parma, and neither arguably did much to warrant staying in the line up this weekend.

Given the lack of a quality alternative who can be deployed on the right wing, it’s likely that Suso will keep his spot in the attacking trident, although with Rade Krunic doing a relatively decent job when picked ahead of Kessie in recent weeks, our summer signing should get the nod in midfield.

Kessie simply isn’t making a big enough impact in either phase of the game at this point, as he often fades as the games go on from a defensive standpoint while sloppiness creeps into his game when in possession and he has shown a real lack of improvement in the final third.

While Krunic hasn’t lit the midfield up when featuring, he has done a solid job adding some presence and steeliness in that area of the pitch while offering a little more technical quality to help our attacks too. It’s hoped that he can start to emerge as more of a creative force in the final third and chip in with some goals and he could cement his place higher up the pecking order.

As for Suso, the Spaniard did little to influence the game against Parma and it’s once again becoming a case of waiting for him to produce a bit of magic that seems to come around every few games.

He may well be our most creative player and most proven attacking ace in recent years, but if he’s not being decisive, he’s offering little to the team in general. In turn, the likes of Ante Rebic and Samu Castillejo will hope to get the nod ahead of him.

Krzysztof Piatek’s struggles continue this season as it’s now just three goals in 14 appearances for the Polish international as he drew another blank last weekend.

While he certainly doesn’t help himself at times and needs to do more to break out of his scoring slump and to fire us up the table, he needs the right service to be able to flourish.

The lack of chemistry and awareness of his strengths from the likes of Suso and Hakan Calhanoglu has been painfully obvious at times even after having played together so many times, but until potential reinforcements arrive in January, Piatek is our best bet of finding a consistent goalscorer as he’s proven to be capable previously.

Rafael Leao’s pace, directness and movement could be the alternative option, and perhaps away from home that’s what Pioli will go with as Piatek continues to stutter.

Bonaventura to stay in XI, Paqueta on bench

As seen in La Gazzetta dello Sport’s graphic below, they are tipping Krunic to get the nod ahead of Kessie, but believe Suso will keep his spot in the starting line-up.

Elsewhere, it’s business as usual with the same faces included, but one key decision that Pioli faces is whether or not to try and find room for Lucas Paqueta as he returns from injury.

It will seemingly come down to one of Calhanoglu or Giacomo Bonaventura dropping out, but given that they’ve impressed for the most part under Pioli, Paqueta may well have to settle for a place on the bench this weekend at least and will face a scrap to get back in. 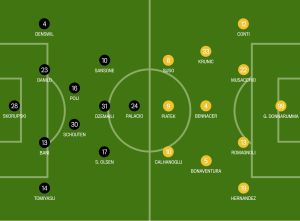