Milan start 2020 by hosting Sampdoria at San Siro on Monday afternoon, with Stefano Pioli and the players looking to bounce back after that embarrassing defeat to Atalanta.

The Rossoneri have it all to do if we are to put ourselves in a position to compete for a top-four spot in Serie A towards the latter stages of the season, as we currently sit 14 points off the pace and haven’t shown enough thus far to confidently suggest we will be in contention.

In turn, it’s vital that we start on a positive note after the winter break, but it won’t be easy against a Sampdoria side struggling at the wrong end of the table and desperate for points.

Hernandez to return from suspension

One huge boost is that Theo Hernandez will return from suspension to take his place in the side at left-back, providing us with more intensity, urgency and a dangerous attacking outlet down the left flank.

The 22-year-old has bagged four goals and an assist in 13 outings so far this season to establish himself as one of our most important players.

With that in mind, it will be a welcome sight to see him back in the starting line-up, and it’s hoped that he can pick up from where he left off to bring that crucial dynamic back into the side.

As per La Gazzetta dello Sport’s graphic below, Davide Calabria and Lucas Paqueta could come in for Andrea Conti and Franck Kessie respectively on Monday. 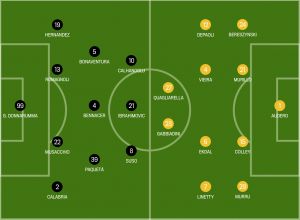 Calabria enjoyed a positive run-out in the friendly win over Rhodense this week, scoring twice and providing an assist for Zlatan Ibrahimovic.

Coupled with Conti’s nightmare defensive performance at Atalanta, it could be a sensible switch to make to give his teammate another run-out to show what he can offer in both facets of the game.

In midfield, Kessie’s limitations continue to frustrate and in a home game that we can fairly expect to dominate possession and take it to Sampdoria, adding that extra technical quality and goal threat could be a smart move from Pioli.

Paqueta is being tipped to get the nod and playing off Ibrahimovic could be crucial for him to find some form, while Rade Krunic is surely an alternative option if Pioli does the sensible thing and drops Kessie.

After arriving this week and wasting no time in getting back into the swing of things, Ibrahimovic is in contention to get an immediate start, according to Sky Sport Italia, as reported by MilanNews.it.

Despite now being 38 years of age, he has evidently kept himself in shape and is in the frame to get a starting berth against Sampdoria, but a decision is likely to be made on Monday ahead of the game.

Given Krzysztof Piatek’s poor form so far this season, it could be the smart choice. That said, there’s no point rushing Ibrahimovic if he’s not 100% fit, but if he ticks all the right boxes and is ready to go, giving him a start in front of a packed San Siro to try and make an immediate impact will be a welcome sight and could provide the squad, coach and fans with a timely lift.