Milan face a trip to Cagliari on Saturday looking to end a three-game winless streak, a run which has also seen us fail to score a single goal.

The season is rapidly passing by and after 18 games, we find ourselves down in 12th place and 13 points adrift of Roma who currently occupy the final Champions League qualification spot.

SEE MORE: How Milan could be set to make two critical mistakes in January transfer window

It’s a damning assessment when you consider we’re closer to the bottom three than the top four, and so Stefano Pioli will know that he has to fix things, and quickly.

As per MilanNews.it, it appears as though he could be testing a new formation which will see us switch to a possible 4-4-2, with neither Suso nor Giacomo Bonaventura featuring in that XI.

That is backed up by La Gazzetta dello Sport in their graphic below, as they’ve gone with the same system and same personnel, and so it remains to be seen whether or not things change over the next 24 hours or this is indeed what Pioli is going with in Sardinia. 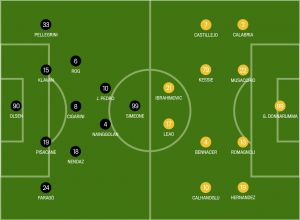 Milan are expected to stick with the same backline that faced Sampdoria last time out, and so that means Davide Calabria will keep his place at right-back ahead of Andrea Conti.

However, as we move into midfield, that is where the changes start to show as Franck Kessie and Ismael Bennacer are tipped to get the nod in the heart of the side, with Samu Castillejo and Hakan Calhanoglu out wide to provide width and a threat down the flanks in tandem with the full-backs.

Up top, Zlatan Ibrahimovic could get his first start after returning to the club, with Rafael Leao expected to get the nod alongside him.

With Cagliari likely to adopt a 4-3-2-1 system, it’s hoped that we don’t get outnumbered and overrun in midfield. While Kessie and Bennacer would provide us with energy and tenacity to try and win that particular battle and give us a foothold in the game, we haven’t fared well in recent times when adopting a four-man midfield.

Further, the touted XI above would see both Suso and Giacomo Bonaventura dropped, and while the former’s poor form arguably makes that the right call, it’s questionable as to whether leaving Bonaventura out makes much sense given his influence since returning to the starting line-up.

Rade Krunic will also drop out, while Lucas Paqueta still seemingly can’t get a look in under Pioli, and that’s a concern for him given he has failed to prove his worth thus far.

There were positive signs from Ibrahimovic on Monday after he came on just before the hour mark, as he showed good physicality, technical quality and a presence in the box. It’s hoped that was a sign to suggest that he still has plenty of life left in him to lead the line.

The 38-year-old could be an ideal focal point in our attack to force the opposition defence to focus on him, and so putting pace and movement around him would be ideal to not only stretch defences and find space in behind, but also to play off Ibrahimovic who will likely drop deep to become more involved in the game.

Leao will certainly offer those attributes, and he’ll hopefully now grab this opportunity with both hands as it appears as though his partnership with Ibrahimovic could be one that Milan focus on and hope will flourish.

That would of course mean no Krzysztof Piatek in the starting XI, and while it would be interesting to see him link up with Ibrahimovic to see if it improves his poor form, it appears as though he’ll have to watch on from the sidelines as Leao gets his chance to impress.

While some will be pleased with Pioli shuffling his pack and trying a different formation and personnel after our poor recent form, others may argue that it’s not the right time to be testing a new system. It can’t get much worse than what we saw at Atalanta though, and so perhaps this is what is needed to at least try something different and see if it produces results.