Milan will be looking to make it three consecutive wins across all competitions on Sunday as we host Udinese at San Siro.

From Zlatan Ibrahimovic’s return, his goal against Cagliari to the much-improved display to see off SPAL and advance in the Coppa Italia, it’s been a good week or so for the Rossoneri for many reasons.

However, the real test now is whether or not they can be consistent, and that means putting a run together to really put ourselves back in contention for a top-four finish in Serie A this season.

Our form so far this year would suggest we have no chance, and perhaps it’s still overly optimistic to think we’ll be back in the Champions League next season. That said, Milan have to keep believing it’s possible, with a 10-point deficit to wipe out at the half-way point of the campaign.

In terms of our potential XI against Udinese, the first talking point is between the posts as Gianluigi Donnarumma missed the win over SPAL in midweek due to injury.

MilanNews.it noted that while Antonio Donnarumma was expected to deputise in the Coppa Italia, it could be January arrival Asmir Begovic who gets the nod in the league and he’s in line to make his debut on Sunday.

As confirmed on the club’s site, the 32-year-old only officially signed with us just days ago, and so while ideally Donnarumma (Gigio) will recover in time, it’s hoped that Begovic has had enough time at Milanello to have developed an understanding with the backline to be ready to step in if necessary.

Kjaer to keep his place?

As per La Gazzetta dello Sport’s graphic below, Simon Kjaer is being tipped to keep his place in the line-up after impressing on Wednesday night.

He’ll face much tougher tests than he did in midweek though, and so Stefano Pioli will have to feel confident that he’s got his match fitness where it needs to be in order to stay sharp over the 90 minutes, especially having come off late against SPAL.

Nevertheless, it was a solid performance as the Dane showed good reading of the play, awareness and positioning, while it didn’t look as though he had only had a handful of training sessions with Alessio Romagnoli.

With that in mind, he deserves to keep Mateo Musacchio out of the side, who incidentally was carrying a knock during the week, while Andrea Conti could keep his spot too with Davide Calabria a fitness doubt. Romagnoli and Theo Hernandez, as expected, complete the backline.

Given how impressive both Ismael Bennacer and Samu Castillejo have been over the last two games, it’s no surprise that the pair are being tipped to keep their places in the XI.

Castillejo in particular has relished the switch to a 4-4-2 system, and there is little doubt that he deserves to be ahead of Suso in the pecking order for now.

However, there could be changes in the other two spots, with Hakan Calhanoglu and Franck Kessie coming in for Giacomo Bonaventura and Rade Krunic respectively.

That duo could rightly feel aggrieved if they do drop out as they played their part in midweek, but defensively, Calhanoglu perhaps offers more off the ball and we arguably need that type of energy and work-rate in this formation and Bonaventura struggles with it slightly.

As for Kessie, we know what we’ll get from him defensively, but it’s a case of waiting for it to click in the final third still, if it ever does.

Despite getting on the scoresheet and registering an assist, Krzysztof Piatek is likely to drop back to the bench along with Ante Rebic, as Zlatan Ibrahimovic and Rafael Leao come back in.

Given how they impressed at Cagliari and the general feeling that it’s this partnership that Pioli will lead with moving forward, it shouldn’t be too much of a surprise if that’s our attack this weekend.

Ibrahimovic’s creativity, movement in the box and physicality complements the pace, movement and directness of Leao well, and so it’s hoped we see more positive signs from that partnership.

However, Piatek should be full of confidence after finding the back of the net again, and so Pioli will no doubt have him ready to come on and make an impact if needed. 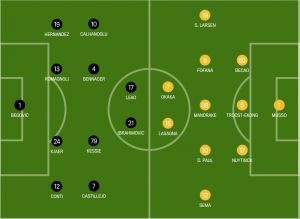 Calhanoglu has not been included in the squad as he has failed to recover from a knock, as per the club’s tweet below, while Donnarumma is included and could be in contention to start with Begovic on the bench.