Milan return to action on Sunday as we host Verona at San Siro looking to make it six consecutive wins across all competitions.

Our turnaround in form across January was much needed as it has helped us advance to the semi-finals of the Coppa Italia, while a win this weekend could move us to within five points of fourth place.

In turn, it’s imperative that we take this opportunity to close the gap, and to head into the Derby della Madonnina next week full of confidence.

That said, coach Stefano Pioli has some decisions to make as there are a number of absentees.

As noted by MilanNews.it, Simon Kjaer has been struggling with illness this week and so he hasn’t made it for the matchday squad.

Matteo Gabbia is an option given Mateo Musacchio’s lack of playing time in recent weeks having been sidelined with an injury, but given his experience it’s highly likely that he will get the nod to partner Alessio Romagnoli.

Elsewhere in the backline, it’s a familiar sight with Theo Hernandez, Romagnoli and Andrea Conti sitting in front of Gianluigi Donnarumma.

Milan will certainly miss Ismael Bennacer’s presence in midfield this weekend, as his tenacity and intensity off the ball coupled with his technical quality in possession has made a big difference this season.

However, he’s suspended for this one and so the expectation is that Hakan Calhanoglu will be shifted inside to partner Franck Kessie in the middle, while Giacomo Bonaventura will take his spot on the left as Rade Krunic is out injured.

Given his impressive recent form, Samu Castielljo will keep his place on the right flank and ultimately the big test will be whether or not Kessie and Calhanoglu are capable of giving us a foothold in the game and striking the right balance between defence and attack.

One of the key points made when Zlatan Ibrahimovic returned last month was that Milan simply can’t just hide behind him and hope that he takes it all on his shoulders to turn our season around.

The 38-year-old has been influential on and off the pitch it seems as aside from his two goals in five games, he’s been spotted during games acting like an assistant coach with his instructions and advice for his teammates.

We can’t call upon him this time round as he hasn’t made the squad either, with MilanNews.it noting above that he is also ruled out due to illness.

That will be a huge blow without doubt, but an in-form Ante Rebic combined with Rafael Leao could lead to a dangerous partnership being formed if they’re both at the races on Sunday.

With the pace, movement and eye for goal between the pair, they will hopefully cause the Verona defence all sorts of problems throughout the game, and they’ll be needed to do so given the lack of options on the bench in terms of an out-and-out striker.

The new signings are expected to start on the bench as Diego Laxalt and Alexis Saelemaekers will hope to play some part in the encounter.

While Laxalt is essentially a back-up option for Hernandez, it’s perhaps hoped that we don’t need to see him feature on Sunday, although it would be beneficial for all concerned to get Saelemaekers a run out to get him used to Serie A and to have a closer look at what he could offer.

That will all depend on how Milan fare as the game goes on though, as Pioli will be delighted to be in a position to give others a run out if we’re in a comfortable position which helps facilitate that.

Nevertheless, that’s three changes to the side that beat Brescia in our last league game, and it’s hoped that those stepping in can deliver. 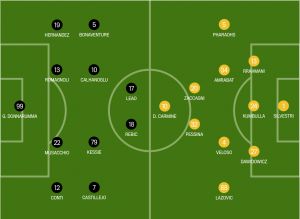