Milan face Inter in the Derby della Madonnina on Sunday night as we look to climb back up the standings, close the gap on fourth place and importantly claim city bragging rights.

There was disappointment last time out for the Rossoneri as we were held to a draw at home by Verona, ending a five-game winning streak across all competitions.

SEE MORE: Why Milan duo are indispensable to Pioli between now and end of season

In turn, it wasn’t ideal preparation for this encounter, but the old adage is that form goes out the window for derbies and ultimately this will come down to who wants it more and who is capable of producing quality when it matters.

It all starts with getting the personnel and set-up right though, and Stefano Pioli is seemingly going to tinker…

As per MilanNews.it, via Sky Sport Italia, Pioli will go with a 4-4-1-1 system, and it’s something that was touted during the week as being tested in training.

Such a formation would see Ante Rebic deployed on the left wing with Hakan Calhanoglu moving into a support role for Zlatan Ibrahimovic.

The Turkish international showed in the win over Torino in the Coppa Italia that when he gets into those dangerous pockets of space between the lines and can attack the opposite defence, he can be a real goal threat with his efforts from distance.

That could essentially be where he’ll be most effective for us moving forward, and particularly playing off Ibrahimovic while breaking from midfield whenever possible, it could suit him and finally get some consistent, positive play out of him.

Meanwhile, Rebic has the pace and work ethic to both attack and defend down the left flank, and so he would arguably seem like the more sensible option in a game like this one instead of Giacomo Bonaventura.

Milan need intensity, urgency and mobility on and off the ball across the pitch this weekend as this clash could be played at a ferocious tempo at times, and so the suggested XI below gives us that in abundance in midfield which could be a sensible call from Pioli to win that all-important battle.

The 38-year-old missed the draw with Verona due to flu, and this week it has been a case of constant updates and progress in training to suggest that he could return in time for this showdown.

As seen both in MilanNews.it’s probable XI above and that of La Gazzetta dello Sport below, Ibrahimovic is expected to feature and that will be a huge boost for us.

His experience, quality, physical presence, leadership, goal threat and ability to create for others will all be vital in this game and so it will give all concerned a huge lift if he is indeed available.

That said, if he lines up against a back three, Pioli must ensure that he gets enough support around him to be effective and have an influence on the game rather than become isolated and largely anonymous.

As per GdS, they’ve gone with Milan sticking with a 4-4-2 shape and for Rafael Leao to be involved. In a game like this, you surely have to side with the 4-4-1-1 and the personnel in that as it seems likely to be a more effective system to shut down Inter while giving ourselves the best possible chance to cause them problems too. 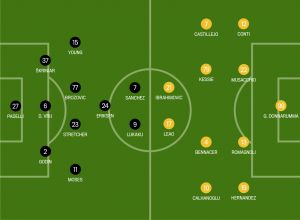