Amid the coronavirus outbreak, Milan’s reshuffled schedule will see us face Genoa at San Siro on Sunday afternoon in our first outing since February 22.

With 13 games to go this season, the Rossoneri stare at a 12-point deficit to fourth place in Serie A and so there is simply no more room for error if we wish to be part of that battle to the end.

SEE MORE: Why future is bright for Milan starlet after breakthrough month

Well-rested albeit perhaps frustrated after the late postponements and question marks hanging over games, the squad must be fully focused and locked in on three points on Sunday in what will be a bizarre atmosphere behind closed doors.

Donnarumma out with injury

As far as the starting XI against Genoa goes, the first big talking point is that Gianluigi Donnarumma is expected to miss out as he hasn’t recovered from an ankle injury, as per Sky Sport Italia.

In turn, Asmir Begovic is expected to get the nod between the posts, and given his experience and quality, he should be a reassuring presence for the backline to keep things tight and secure a clean sheet.

According to MilanNews.it, there is a decision for coach Stefano Pioli to make in defence, and that revolves around the right-back position with either Davide Calabria or Andrea Conti getting a starting berth.

Both have shown defensive vulnerabilities, but given we’re at home and will look to get on the front front and make the pitch as wide as possible, Conti could be the smart option as he offers more going forward. That said, to give Theo Hernandez a license to get forward down the opposite flank, having Calabria sit back and provide defensive protection is a viable alternative.

Meanwhile, Simon Kjaer is being tipped to start as he has seemingly recovered from his injury setback, but there is perhaps an argument to be made in favour of Matteo Gabbia keeping his place.

The 20-year-old impressed against Fiorentina and when he came on against Torino, and having signed a new contract since his last outing, his confidence and belief will be at an all-time high and it seems questionable to disrupt that momentum by dropping him when he’s a solid option.

We’ve seen significant improvement in our attacking performances in recent outings, and so it would come as no surprise if Pioli decided not to change anything.

Samu Castillejo has made the spot on the right flank his own, while Ismael Bennacer is maturing and developing into a pillar of the side. Franck Kessie is arguably the safest option next to him in the heart of the midfield to offer energy, work-rate and combativeness, while Ante Rebic’s goalscoring form should ensure he keeps his spot.

Hakan Calhanoglu has shown signs of personal improvement in that central role driving forward to support Zlatan Ibrahimovic as well as interchanging with Rebic, and working around the Swede has been important too as he has given us a focal point.

MilanNews in their report above go with a 4-2-3-1, while Gianluca Di Marzio has gone with an identical XI but in a 4-4-1-1. Time will tell which it will be, but in terms of trying to get the best out of each player in their most natural position and role, the 4-2-3-1 seems like the better option as La Gazzetta dello Sport note below.

It feels like forever since we last watched Milan play, and while my thoughts go out to all those affected by the coronavirus outbreak with northern Italy hit particularly hard, it’s hoped that we can get back to winning ways on Sunday to provide a lift to all concerned. 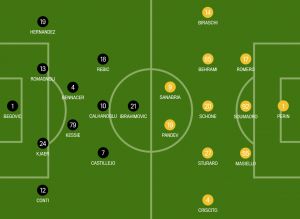