After sustaining an injury setback in training on Monday, it’s unclear if Zlatan Ibrahimovic will be fit to feature for Milan when the Serie A season restarts next month.

As noted by the club’s official site, the 38-year-old suffered a calf muscle injury and will be examined again in 10 days time, although the good news was that there was no damage to his Achilles tendon as initially feared.

SEE MORE: Who is Denzel Dumfries? Analysis of €15m+ rated ace who could be key solution for Milan

Nevertheless, he will likely now train with caution to avoid aggravating the injury, and with Football Italia noting that the campaign could resume from June 13 onwards, it casts doubt over whether or not Ibrahimovic will be available for coach Stefano Pioli for that first game back.

Naturally, the hope is that he is passed fit and can feature, such is the 38-year-old’s influence and presence in the side having scored four goals and provided an assist in 10 appearances since returning in January.

However, Pioli will have to start thinking about alternative solutions just in case, and it seemingly involves one of two systems being adopted with Rafael Leao playing an important role in either.

As seen in the two images below, either a 4-3-3 or a 4-2-3-1 system is likely to be used by Pioli. We’ve seen both already this season, and it could be argued that the 4-2-3-1 formation or a variant of it is perhaps the better fit for the players available.

What is absolutely clear in either situation though, is that Leao is going to have to deliver as he will step into that role of leading the line which Ibrahimovic would have occupied, and on the basis of his season thus far, he hasn’t shown enough to suggest that he’s a reliable and capable replacement.

Although he’s still only 20 years of age, Milan would have been expecting more than just two goals and two assists in 22 appearances so far this season, and so he’ll have to start showing signs of improvement and an ability to be decisive in the conclusion of the campaign to prove his worth moving forward.

This could be seen as an ideal opportunity for him to do that, while he’ll get support from Samu Castillejo and Ante Rebic in the final third with the attacking pair impressing since the turn of the year.

Hakan Calhanoglu’s work ethic and creativity will be crucial, while Ismael Bennacer and Franck Kessie will provide the steeliness in midfield to offer us a platform on which to go out and win games.

It’s not significantly different to what we saw prior to the coronavirus lockdown, but putting the burden of replacing Ibrahimovic in the line-up on the shoulders of one young player is arguably not going to work.

Leao is ultimately a different kind of forward. He won’t be able to offer the same physical presence in the box, nor will he be a target man for others to feed off in the same way. His strengths are his pace, movement and directness, and so if he is given licence to roam and run the channels rather than be static up top, it will be down to Rebic, Calhanoglu and Castillejo to get up the pitch and offer support and to chip in with goals of their own.

The system and personnel will need to combine to show that there hasn’t been an over-reliance on Ibrahimovic and that we can pick up results without him, but time will tell if firstly he is indeed officially ruled out of any games, and if Pioli will follow a similar path to the ones laid out below. 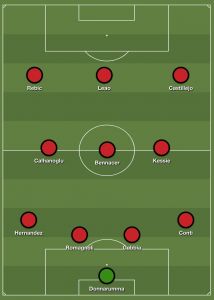 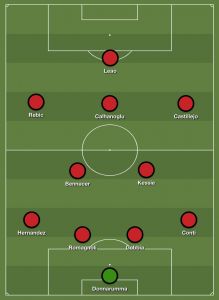