Milan take on Juventus in the second leg of our Coppa Italia semi-final tie on Friday, and Stefano Pioli’s starting XI is reportedly taking shape.

It’s been over three months since our last competitive outing, with the coronavirus pandemic grinding the campaign to a halt as most of the world went into lockdown.

READ MORE: Why Milan ace is now facing a real test of character as snub touted vs Juventus

Now though, the season has been given the green light to resume starting with the Coppa Italia, as we look to book our spot in the final with the tie finely poised at 1-1 from the first leg.

Zlatan Ibrahimovic will play no part on Friday as he’s injured (and suspended), while Samu Castillejo and Theo Hernandez will both miss out too due to suspension and so that’s three important figures that we’ll have to do without.

Given it’s away from home and that it will take time for the players to get back to full match fitness and feel sharp at 100 percent, the expectation, or at least the sensible option, is that Milan look to pack the midfield and try to get a foothold in the game to get some sense of control over proceedings.

As noted in the tweet below, Antonio Vitiello has us going with a 4-2-3-1 system, which could perhaps morph into a 4-3-2-1, while it would come as no surprise if the shape and system changed out of possession to make it more difficult for Juventus to break us down.

Ultimately though, the picture is becoming clearer on what XI we’ll put out, starting with Gianluigi Donnarumma between the posts with Andrea Conti, Simon Kjaer, Alessio Romagnoli and Davide Calabria in a back-four.

Conti and Calabria will have to be on their game to nullify the threat down the flanks, while the lack of pace in the backline is a concern, especially if Juve go with Douglas Costa and Cristiano Ronaldo in attack.

Nevertheless, we’ve got a solid two-man midfield partnership to offer the defence some protection in Ismael Bennacer and Franck Kessie, while there is a lot of technical quality and creativity in our attack with three playmakers set to start in Lucas Paqueta, Giacomo Bonaventura and Hakan Calhanoglu expected to get the nod.

Much like our defence, there is a glaring lack of pace in that trio, but perhaps Rafael Leao can offer that off the bench if needed in the latter stages of the game with the Portuguese starlet being tipped to be snubbed and left on the bench.

Given Ibrahimovic’s absence, the 21-year-old would have perhaps been an obvious choice to step into the void up front given he is seemingly being mentored in taking up that role as a long-term solution for the Rossoneri.

However, both of the touted line-ups above have him on the bench. Ante Rebic is instead tipped to lead the line and he’ll be hoping to pick up from where he left off after an impressive turnaround in his season as he scored several important goals after the turn of the year, following a bitterly disappointing start to life in Milan.

Time will tell if that’s what Pioli goes with, but given his limited options and given we’re coming off the back of a three-month absence from competitive football, packing the midfield, starting a number of players capable of keeping possession and dictating the tempo of the game could be pivotal in our attempt to keep Juve quiet, show quality in attack and secure a place in the Coppa Italia final.

As per MilanNews, it looks as though Bonaventura will be deployed through the middle, with Paqueta on the right and Calhanoglu on the left. 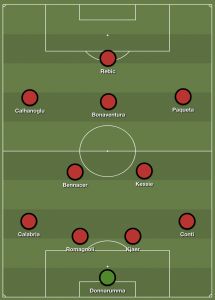