It was a disappointing return to action for Milan on Friday night, as we exited the Coppa Italia on away goals after a goalless draw at Juventus in the second leg of our semi-final tie.

Having performed well against the Bianconeri on our last trip to Turin in Serie A, there was slim hopes that we could pull off a surprise result even despite the absence of key players through injury and suspension.

However, losing Ante Rebic to a straight red card after just 17 minutes was a pivotal blow, but our struggles were already obvious in the opening 15 minutes of the encounter.

Milan off the pace, chasing shadows

In the opening stages of the clash, Milan saw little of the ball and were ultimately chasing shadows as Juventus looked sharper, fitter and more comfortable being back in competitive action.

Perhaps it just took our players a little while to get going as we certainly improved in the second half, but the nightmare scenario after three months out was to be made to chase the game from the off and struggle to retain possession ourselves.

It also had something to do with how the two sides were set up tactically. The image below was just one example of countless occasions in the first half where we struggled to match up with Juventus and were at times outnumbered too, which in turn led to us being outplayed.

While Miralem Pjanic enjoyed time and space in a deeper position, Blaise Matuidi and Rodrigo Bentancur were finding space between the lines as Cristiano Ronaldo dropped deep to occupy the space between our deeper midfield duo and the backline.

That in turn left both Andrea Conti and Davide Calabria exposed down the flanks with Franck Kessie and Ismael Bennacer picking up assignments through the middle, and with Lucas Paqueta struggling to track back with his compatriot, Alex Sandro enjoyed success down the left from the very first minute.

It exposed our weaknesses out wide as Danilo and Paulo Dybala were also problematic on the right, while Juve were also able to pop the ball around in midfield.

To our credit, we remained resolute and organised defensively as they got closer to goal and in turn were able to keep a clean sheet. However, particularly in that early part of the game, a key period considering we hadn’t played for months, we had no answer to Juve as they looked the better side by a mile. 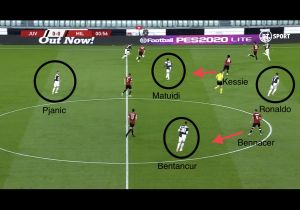 It seems an obvious thing to point out, but it became clear immediately that unless we introduced a frontman, we were going to struggle to carve Juve open.

After Rebic was shown a straight red card, we lost our focal point up top and our lone frontman who spearheaded the attack. That in turn forced Giacomo Bonaventura into a more advanced role but he couldn’t offer the movement or physical presence needed to trouble Leonardo Bonucci and Matthijs de Ligt, with Hakan Calhanoglu and Paqueta supporting him.

As seen in the image below, we were outnumbered and outmuscled in attack from that point, but we did improve as Kessie and Bennacer began to push forward and create more openings in the second half.

In their defence, the make-shift frontline did fashion one really good chance which Calhanoglu headed wide which in fact stemmed from the sequence of play below, and while they showed glimpses of being a threat, any counter-attack needed to be swift, precise and clinical if it was going to trouble the Juventus defence and often it slowed down and went nowhere.

Rafael Leao’s introduction didn’t change much as he was largely ineffective, but losing Rebic was a costly setback and further blunted an attack that has struggled for goals this season having bagged just 28 in 26 league games. 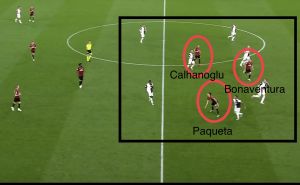 It was a disappointing outcome for Milan, but the players deserve credit for the effort they put in to dig deep and stay in the game having played with 10 men for over 70 minutes. Unfortunately, through a combination of early tactical holes, Rebic’s red card and the absence of an impact from Leao, we couldn’t get that all-important goal.