Milan will return to Serie A action on Monday night as we prepare to face Lecce in our first league game back since the coronavirus pandemic.

Despite a hard-fought goalless draw against Juventus last week, it wasn’t enough to secure a place in the Coppa Italia final, and so all our focus is now on qualifying for Europe through our league position.

READ MORE: Who is Pierre Kalulu? Analysis of talented young ace closing in on Milan switch

The Champions League is seemingly out of reach given we’re facing a 12-point deficit to fourth spot while Atalanta also have a game in hand, and so more realistically, our aim is to leapfrog Napoli or Roma to at least get back into the Europa League next season.

As noted by MilanNews, there will be at least one change with Samu Castillejo returning from suspension to take his place in the starting XI again, and the Spaniard’s work ethic and attacking threat down the right flank will be a welcome boost for the Rossoneri.

It’s added in that report that Ante Rebic will likely continue to be the focal point up top as he’ll be given another chance despite his early red card against Juventus last time out, thus potentially leaving Rafael Leao on the bench again.

However, a decision will need to be made on who gets the nod at right-back with Davide Calabria and Andrea Conti in contention, while Lucas Paqueta and Giacomo Bonaventura are seemingly vying for a spot as the third creative player behind Rebic.

With Conti more settled at right-back and perhaps with Bonaventura having shown more consistency in the final third, it would arguably be no real surprise if that duo are named in the line-up. Nevertheless, Paqueta did show some positive signs last time out, and so he might feel as though he should get another opportunity.

That said, La Gazzetta dello Sport, as per their graphic below, have Milan going with a slightly different look with Leao starting up top and Rebic out on the left supporting him alongside Calhanoglu and Castillejo.

Given the Portuguese youngster’s struggles to make an impact this season and his apparent snub last week given he couldn’t get into the XI despite Zlatan Ibrahimovic’s absence, it would be a surprise if Pioli gave him a starting berth considering his lack of impact coming off the bench in Turin.

In turn, it remains to be seen if that materialises or not, but there is one other major boost in the pipeline for Milan and Pioli, with Theo Hernandez returning to the XI after he also missed out against Juve through suspension.

Given the attacking quality that he has brought to the side so far this season, that will give us a real lift and it’s hoped that he can continue to make an impact in the final third, while also showing signs that he has improved defensively during the break too.

It’s a familiar look in many ways and while Rebic certainly let us down last week with his early dismissal, he arguably deserves another crack at it ahead of Leao, with Conti and Bonaventura perhaps likely to feature alongside him too. 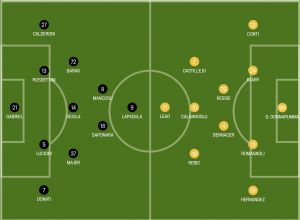