A key factor in Milan’s goal glut in our 4-1 win over Lecce on Monday was the performances of our attacking quartet as they all made a decisive impact.

Samu Castillejo, Giacomo Bonaventura and Ante Rebic all got on the scoresheet, while Hakan Calhanoglu came away with two assists and was heavily involved in the other two goals as well.

Their influence off the ball deserves plaudits too, as they worked tirelessly as a unit to apply a high press to ensure we controlled the game for large parts and put Lecce under pressure, while they constantly tracked back and offered defensive help too as their energy, desire and commitment were all fundamental in the win.

That said, were it not for their decisive impact in the final third, Milan wouldn’t be enjoying an important win in our first game back in Serie A since the coronavirus lockdown. 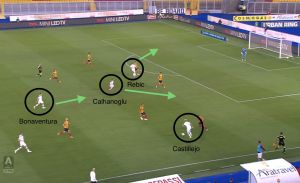 The image above is taken in the build up to our opening goal and after some swift, incisive build-up play which moved us up the pitch quickly, the front four took over the show.

While Calhanoglu drags one defender out wide before delivering what turned out to be the assist, Rebic takes his marker with him towards the back post which in turn also opens up space for Bonaventura to attack as he was in fact on hand to finish things off as he and Castillejo almost got in each other’s way.

The movement and dynamism that the front four provided pulled Lecce’s backline in different directions in the opening 35 minutes, and that was seen again in the image below with Theo Hernandez opting to shoot when Rebic was in space in the box and should have been offered a simple enough finish.

Castillejo and Bonaventura both found space too as the movement was key from the Croatian. 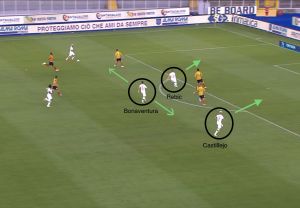 Another important aspect of Milan’s ability to score four goals on Monday was the simple fact that they got players in the box or in dangerous positions to create something.

The image below is just prior to Bonaventura tapping home our second, with Calhanoglu, Castillejo and Rebic all in-and-around the box with width being provided by Andrea Conti and Theo Hernandez too.

Too often we’ve allowed our lone frontman to become isolated and we simply haven’t gotten enough players forward to put them in effective positions. That wasn’t the case against Lecce. 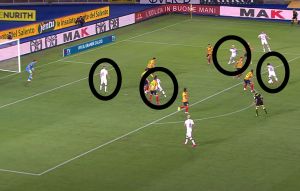 How many times have we seen Milan fail to finish off counter attacks? There were no such problems this time round as Calhanoglu’s pinpoint through-ball sent Rebic on his way as he kept his composure and slotted home an impressive third.

From Castillejo keeping his man occupied out wide to effectively make it a 2v2 situation, Calhanoglu took both defenders out of the equation with one pass and Rebic did the rest. 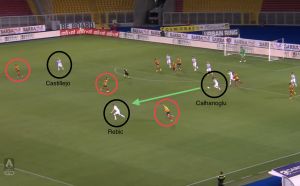 It was a clinical goal, something we haven’t been able to say of Milan much this season, but again, it just shows that the attacking quartet were on point and credit also goes to Pioli for giving them the freedom and flexibility to interchange and float as they all presented Lecce with real problems in their own ways.

While Zlatan Ibrahimovic continues his recovery from injury, it will be interesting to see if this same quartet get the nod against Roma on Sunday, and importantly if they can follow this performance up and prove that they can deliver against tougher opposition.