After back-to-back wins in Serie A, Milan will be hoping to extend that good form against SPAL in midweek as we continue to chase Europa League qualification.

With 10 games remaining, we trail Napoli by three points while Roma are six points above us in fifth place in the standings, and with Atalanta continuing to win it seems fourth spot might be beyond our reach.

Nevertheless, the focus simply has to be on each game as it comes and doing our job, and it’s hoped that the momentum created over the past week will continue into the midweek encounter with bottom-of-the-table SPAL.

Rotation is going to be crucial now as it’s a quick three-day turnaround since the Roma clash, and so Stefano Pioli will arguably be considering his options and potential changes to his starting line-up.

As per Antonio Vitiello’s tweet below, Zlatan Ibrahimovic has seemingly recovered from his calf injury and will be available to hand Pioli a major boost, but it’s highly unlikely that he’ll come straight back into the XI given his lack of training and football over the past month.

However, it’s suggested that Davide Calabria and Lucas Paqueta could come in to replace Andrea Conti and Giacomo Bonaventura respectively, and those seem to be the sensible choices especially the latter given the Brazilian’s positive impact off the bench last time out.

Paqueta is also being tipped to start by La Gazzetta dello Sport, as seen in their graphic below, but that could ultimately be the only change as we look to keep up our good run and continue to push for European qualification.

Having been so impressive in the last two games with their effort and energy off the ball coupled with their ability to be a threat collectively, it will be interesting to see if Ante Rebic, Hakan Calhanoglu, Samu Castillejo as well as Paqueta perhaps continue to impress and in turn keep Ibrahimovic out of the game if he’s ready to return.

Nevertheless, it’s great to see some level of consistency in the side too with a settled backline in front of Gianluigi Donnarumma as well as Ismael Bennacer and Franck Kessie in front of them, and it’s hoped that is a key factor in itself in helping us pick up three more points to continue to move in the right direction.

Man for man, it’s difficult to argue against the suggestion that Milan have more talent on the pitch. However, this is no time to get complacent as winning is crucial ahead of facing Lazio at the weekend.

MilanNews, via Sky Sport Italia, have contradicted the above though, as it’s suggested that Pioli could opt to heavily rotate having tested out alternative options in training. Calabria, Matteo Gabbia, Rade Krunic, Alexis Saelemaekers, Paqueta and Rafael Leao are all potentially in contention as per the report above.

With Lazio, Juventus and Napoli to come starting this Saturday, perhaps it would be a sensible time to make a raft of changes and rest key players. 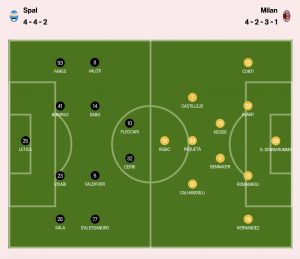