Milan face a difficult test on Saturday night as we take on Lazio at the Stadio Olimpico hoping to try and close the gap on Roma and Napoli, while fending off the chasing pack too.

There was real disappointment in midweek as we were only able to salvage a point against 10-man SPAL, and so Stefano Pioli will undoubtedly be hoping to get a positive response from the players after such a setback.

READ MORE: How Milan could line up vs Lazio: Three key changes from Pioli, star to keep his place in XI

We’ve been boosted by the fact that both Ciro Immobile and Felipe Caicedo are both suspended and will be absent for Lazio, but the Scudetto-chasing capital club certainly still have plenty of quality available to Simone Inzaghi. That said, with Immobile scoring 32 goals and providing seven assists in 36 appearances so far this season, it’s a huge blow for them to lose their talisman.

While we’ll have to be at our best collectively, there are also specific battles on the pitch which we must come out on top in, and that in turn could put us in a strong position to return home with all three points. 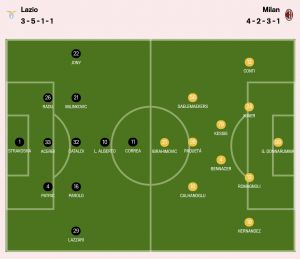 With that in mind, here are four battles that we’ll have to win…

Rebic vs Lazio back three

The Croatian forward will need support so he doesn’t become isolated, but his energy and pressing off the ball to put pressure on as well his movement and intelligent runs off the ball will be crucial to stretching Lazio’s back three to allow the likes of Paqueta and Calhanoglu to find pockets of space between the lines.

Zlatan Ibrahimovic could feature off the bench as he builds his fitness back up, and he’ll offer a different kind of presence up top with his physicality and height, and so Milan could switch to more of a target man if needed.

However, with Rebic expected to get the nod, it’s imperative that he not only offers a threat in the box, but also provides opportunities for others too by dragging the three-man defence out of position and not allowing them to dominate him and settle into a rhythm.

Sergej Milinkovic-Savic is having a great season, with six goals and seven assists in 34 appearances thus far.

Particularly with no Immobile in the side, he’ll be expected to step up and try and show more quality to make up for that absence. With that in mind, we need Franck Kessie to try and shut him down with his defensive work in front of the backline and not allow him to become influential in the final third.

Although we took a step back collectively against SPAL, Kessie has impressed since the restart. He’ll need to be on top of his game this weekend though as we have to keep one of Lazio’s most talented players quiet if we are to nullify their threat.

The Brazilian playmaker impressed at SPAL, as he found space between the lines and was a constant threat. That said, he didn’t find the back of the net and so there is still a major issue to be addressed.

He’ll likely come up against Danilo Cataldi in the holding midfield role for Lazio, and if we’re going to get enough support up to Rebic and cause Lazio problems, Paqueta has to avoid being shackled by his rival.

If he can escape his attention and get into areas where he can be a problem for Lazio, it will invariably lead to us creating opportunities and so it’s hoped that he can emerge as an influential figure in the encounter.

While not having to prepare for Immobile and Caicedo is a major boost, Alessio Romagnoli and Simon Kjaer are still going to have their hands full with a two-man attack consisting of Luis Alberto and Joaquin Correa.

Kessie and Ismael Bennacer will need to keep close tabs on Alberto as he drops back to find space and tries to pull the strings, but it’s Correa’s pace and movement which is a concern.

Neither Kjaer nor Romagnoli are the quickest of centre-halves, and so their positioning and awareness is going to have to be spot on in order to keep Correa under wraps. He’s been a problem for us in previous meetings, and it’s hoped that we don’t allow him to be an issue this time round as while Lazio will look to get on the front foot at home, they will also be a serious threat on the counter attack with the Argentine up top.