After the highs of the win over Lazio at the weekend, Milan must switch their focus to another difficult assignment as we host Juventus on Tuesday night.

With the gap to Roma and Napoli cut to two points and with some breathing space between ourselves and the chasing pack from eighth place downwards, it’s all to play for in the final eight games of the Serie A campaign.

The slip-up at SPAL was a bitterly disappointing blow and could yet prove to be very costly, but we head into the encounter with the reigning champions in midweek full of confidence and belief as things are arguably starting to click into place under Stefano Pioli.

That said, he has decisions to make for this game, with Mateo Musacchio, Leo Duarte and Samu Castillejo all missing due to injury, while Hakan Calhanoglu hobbled off against Lazio in the first half. So, how could the Milan XI look vs Juventus?

Six certainties, attack yet to be decided…

That group has provided us with a solid foundation since the restart, looking compact and organised to lead to a much more stingy backline that has proven to be much more difficult to break down, as evidenced with clean sheets against Roma and Lazio.

Hernandez, Kessie and Bennacer also have a crucial role in our attacking play too, whether it be quickly distributing the ball to our more creative players and being that link between defence and attack, or making penetrative and powerful runs in the opposite half to pose a threat themselves.

In turn, that block of six is almost a certainty barring any late setbacks, with La Gazzetta dello Sport going with the same line-up to that point in their graphic below. 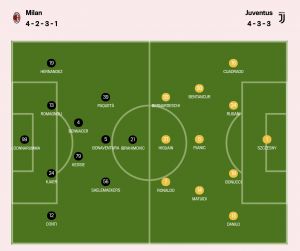 The uncertainty comes further up the pitch, and it begins with whether or not Calhanoglu will be passed fit to start. The report from MilanNews above suggests that the Turkish playmaker will recover in time, while Alexis Saelemaekers will get the nod on the opposite flank having impressed last time out as he steps in for Castillejo.

Meanwhile, there are also two separate scraps for a starting spot, with one of Giacomo Bonaventura or Lucas Paqueta starting behind either Zlatan Ibrahimovic or Ante Rebic.

The report gives the advantage to Bonaventura and Ibrahimovic, and so it could be just as we were against Lazio to begin with, with the option of injecting some more bite, energy and pace into the side off the bench in the second half.

It worked brilliantly at the weekend, but time will tell if it will be as effective against the table-toppers who will no doubt have analysed our performance and prepared accordingly to deal with it better than Lazio did.

Time will tell if Calhanoglu recovers and who Pioli prefers up front, but it’s refreshing to see us boast options and quality depth to battle it out for starting berths, and regardless of who gets the nod, it’s hoped we claim another important three points.