Milan secured a hugely impressive 3-0 win over Lazio this past weekend, and did so with a different look to our attack in either half of the encounter.

Goals from Hakan Calhanoglu, Zlatan Ibrahimovic and Ante Rebic sealed what was a brilliant victory given the opposition and our own slip-up against SPAL prior to that, and it was a welcome boost in our ongoing battle to qualify for the Europa League.

It was Ibrahimovic who got the nod in the starting line-up as he led the side up top, and while he made his presence felt, he was replaced at the break with Rebic coming on and being equally as effective. Here is how Stefano Pioli saw his tactics pay dividends either side of the interval…

Ibrahimovic influence in first half 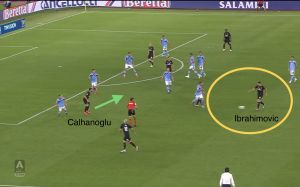 The 38-year-old isn’t going to press and harass defenders like Rebic does, and in the first 15 minutes it looked as though we were going to let Lazio get comfortable at the back and set the tempo. What we did really well though was to press well in midfield and our own half which ensured we cut off supply lines to Lazio’s forwards.

Further, Ibrahimovic doesn’t make constant runs across the frontline and in the channels to create space and stretch the defence, but what he does do very well is identified in the image above.

The Swede constantly dropped deeper to pick up possession and involve himself in our build-up play, and after the first 15 minutes or so, he began to have a bigger influence. While he had a goal ruled out before scoring from the penalty spot, he was also fundamental in the build up to Calhanoglu’s opener as he pulled the strings in a withdrawn space and made the pass which eventually saw the Turkish playmaker cut inside and see his deflected effort hit the back of the net. 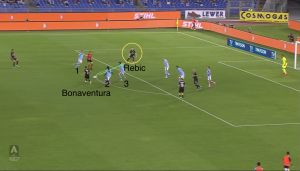 Firstly, credit must go to Giacomo Bonaventura for Rebic’s goal as he picked out his assist perfectly as seen in the image above as he took out three Lazio players with one pass to set the Croatian forward free to score.

However, this shows the difference in terms of positioning for Ibrahimovic and Rebic, while the latter also raised the tempo to allow us to be more direct and have a threat on the counter attack with his pace and movement and allowed us to start pressing higher up the pitch.

Having taken the lead and with Lazio chasing the game, it worked brilliantly as he found space on the left side of the box yet again and found the clinical finish to wrap up the three points.

Overall though, it was great to see us pose two different types of threat in either half as we’ll need to rotate given the fixture schedule with eight games to go. Whether it’s Ibrahimovic dropping deep to pull strings and create for others while also being a target in the box or Rebic’s clever movement off the ball and energy to press the opposition defence, both produced results on Saturday.

Theo Hernandez back in form

Another impressive aspect of our performance was Theo Hernandez’s influence as he has been rather quiet since the restart from an attacking perspective.

While he has shown improvement defensively, we’ve not seen the same bursting, explosive runs forward that have caused opponents real problems all season but they made a welcome return this past weekend.

As seen in the images below, the Frenchman made two brilliant runs in the second half and should have scored one if not both chances as he failed to find the finish. The blueprint was clear though, attack the space between Lazio’s right-back and centre-half and use his pace to break clear to expose their vulnerability to set up one-on-one situations with the goalkeeper.

Hernandez will be kicking himself that he didn’t get a goal, but there were two great passes, two great runs and a return to attacking form for one of our most impressive players this season. Plenty of positives to take into the clash with Juventus on Tuesday. 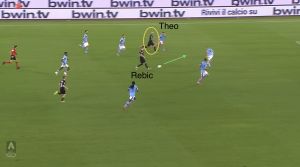 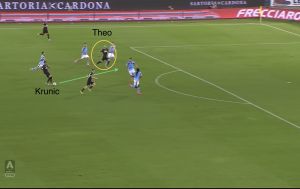