Milan will look to keep our impressive form going this weekend as we head to Napoli on Sunday night looking to secure a crucial win in the battle for Europa League qualification.

After earning deserved victories over Juventus, Lazio and Roma in recent weeks, our fixture schedule doesn’t get any easier as we continue to scrap for a top-six finish in Serie A.

READ MORE: How Milan could line up vs Napoli: Boost for Pioli, key decision to consider for clash

Having done so well to this point, it’s hoped that we can deliver another big performance to keep our momentum going with just seven games remaining this season, and it could come down to specific battles on the pitch which ultimately determine who comes out on top. 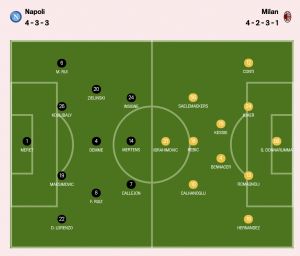 Alessio Romagnoli and Simon Kjaer have done very well since the restart, giving us a solid foundation in defence to go on and win games by keeping it tight at the back.

However, as we saw against Juventus with Gonzalo Higuain and Cristiano Ronaldo’s movement off the ball, it did cause them problems as there’s still work to be done on their communication and they’re not the quickest of centre-halves either.

Dries Mertens is the exact nightmare for the pair with his speed and movement, and so they can’t afford to switch off at all if we are to keep Napoli’s all-time top goalscorer quiet.

Our two full-backs will have very different battles on their hands. Lorenzo Insigne will be a creative presence and goal threat drifting inside from the left and so Andrea Conti has to keep tabs on him and try and force him into less threatening areas with Alexis Saelemaekers needing to put in a defensive shift too with Mario Rui likely to get forward to create an overlap.

In contrast, Theo Hernandez’s positioning and awareness has been poor at times this season, and although he has shown improvement in his defending since the restart, he can’t have a lapse in concentration as Jose Callejon has shown that he can pounce at the back post and from the right flank to score goals.

Both players need to be on their toes throughout while getting help when needed, and hopefully we can nullify Napoli’s attack from out wide.

Both creative stars are important for their respective teams in setting the tempo and dictating possession, and so while the midfield battle as a whole is key, it will be interesting to see who has the bigger influence on the game out of these two.

As he has shown in the last few games and after he came off the bench against Juventus, Hakan Calhanoglu is hitting some good form now and his importance in the side is arguably coming to the fore.

He needs to show consistency and deliver in big games, and it’s hoped that he can make us tick in midfield and ultimately overshadows Fabian Ruiz’s influence.

It’s going to be a really physical battle up front between Zlatan Ibrahimovic and Kalidou Koulibaly, while Kostas Manolas is no mug either.

It will be imperative that the Swede is able to pull away from those two and come short to try and build our play as he has done so effectively against Lazio and Juventus in the last two games.

Further, Ante Rebic’s pace, movement and the prolific finishing he’s showing currently could be a game-changer yet again, as his ability to find space in the box with the defence occupied with his strike partner will potentially be decisive.

It might not all come down to the starting XIs, as both sides boast quality off the bench too.

Napoli will likely be able to call upon the likes of Arkadiusz Milik, Matteo Politano and Hirving Lozano. As we’ve seen in the last few outings, Stefano Pioli has used his substitutions brilliantly and they’ve had big impacts on games.

With Rafael Leao, Giacomo Bonaventura, Lucas Paqueta and others itching to be involved, if the game is still up for grabs in the last 20 minutes or so, these individuals could become absolutely crucial to the outcome.