Milan host Parma at San Siro on Wednesday evening as we look to try and extend our impressive form since the restart of the Serie A campaign.

The Rossoneri have won four and drawn two since our return to the pitch, and having taken 10 points from encounters with Roma, Lazio, Juventus and Napoli, confidence and belief will undoubtedly be high within the group.

READ MORE: Why Milan star must play in more natural role to be effective in last six games

That has helped us move to within four points of Roma in fourth place, while we trail Napoli by just two with six games remaining. That said, we’re also still fending off the chasing pack as we look to try and secure a direct route into the Europa League next season.

With games being played every three days, it’s expected that Stefano Pioli will rotate his side and freshen things up, but he’ll have to strike an important balance when making changes as he will be desperate to avoid disrupting the balance and chemistry that his preferred starting XI has built in recent weeks.

Nevertheless, as per MilanNews, the Milan boss is being tipped to make at least three changes with Davide Calabria, Giacomo Bonaventura and Rafael Leao said to be in contention to come into the starting XI.

As seen in their graphic below, La Gazzetta dello Sport have gone for a similar line-up, but they envisage Ante Rebic getting the nod on the left flank ahead of Leao. 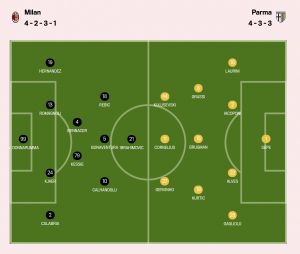 It will be interesting to see what Pioli opts for, as ultimately given our impressive recent performances and results, it could be considered a risk to make too many changes to what has been a winning formula. That said, there are still six games to go and we can’t afford seeing key individuals burn out before the campaign concludes.

Given their positive influence on the side, it’s no surprise that Gianluigi Donnarumma, Simon Kjaer, Alessio Romagnoli and Theo Hernandez are all being tipped to start, although given Calabria’s unreliability when involved this season, swapping him in for Andrea Conti is a concern as he hasn’t been the most solid of defenders for us.

It could be argued that either Franck Kessie or Ismael Bennacer, or even both, need to be rested having been ever-present since the restart, but it comes back to Pioli not wanting to rock the boat too much as the midfield duo are building a fundamental partnership in the heart of the side and we simply can’t afford to drop points in this game.

Zlatan Ibrahimovic will improve his match fitness with more minutes and this is a game in which his physical presence and technical quality could make all the difference against a compact and hard to break down Parma side, while Hakan Calhanoglu and Giacomo Bonaventura will hope to provide the creativity to unlock their defence.

Rebic has been in fine form in recent months and so dropping him to the bench seems like a questionable move, but Leao has been knocking on the door with three goals in his last five appearances, all of which have come as a substitute, although it will be a real test for him to prove that he can deliver as a starter and put in the work to ensure we have enough energy, movement and pressure in the final third especially with Ibrahimovic leading the line.

Time will tell what Pioli goes with, but either way, we’ll have a lot of quality out on the field and it’s hoped that it will be enough to secure another three important points to build on what we’ve seen in the last six league games as we must keep this momentum going in our bid to crack the top six.