Milan face a tough assignment on Tuesday night as we travel to Sassuolo looking to not only maintain our lead over the Neroverdi, but to also apply further pressure on Roma.

In order to avoid having to go through the qualifying rounds of the Europa League and instead go straight through to the group stage, we must finish above the Giallorossi.

Napoli are largely irrelevant as their Coppa Italia success has changed the situation, and so with just two points separating us and Roma, it’s hoped that we can continue our impressive form since the restart and leapfrog Paulo Fonseca’s men between now and the end of the campaign.

That said, we’ll also have one eye over our shoulder at Sassuolo, who know that a win on Tuesday will close the gap on us to five points with three games remaining. 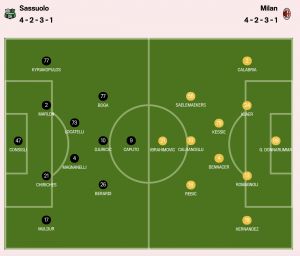 Jeremie Boga is having a fine season, as along with his pace, movement and trickery, he’s added a decisive end-product as reflected in his tallies of 11 goals and four assists in 34 games.

The right-back position has been a weakness of ours for some time now and so it will be interesting to see if Davide Calabria keeps his starting spot after an improved effort against Bologna last time out.

Whether it’s him or Andrea Conti though, they have to put in a top defensive shift as any lapses in concentration or positional mistakes will be exposed, as Boga will hurt us and it could have a direct influence on the outcome of the meeting.

There’s two sides to this particular battle, as on one hand if we do come out on top in midfield and dictate the tempo and dominate possession, it will give us a much better chance of securing all three points.

Hakan Calhanoglu will get on the ball more and set our attacking trio of Ante Rebic, Alexis Saelemaekers and Zlatan Ibrahimovic free more consistently, while also posing a direct threat himself as a lot of our good play has gone through him in recent weeks.

However, if Ismael Bennacer and Franck Kessie emerge as winners of this scrap, it will also help in cutting the supply routes off to striker Francesco Caputo who has 18 goals and seven assists in 33 games this season and so isolating him will be key.

A familiar face in Manuel Locatelli and stalwart Francesco Magnanelli have impressed in front of the defence for Sassuolo, while Filip Djuricic will be a threat we also need to deal with. Both defensively and offensively, Milan emerging as winners in midfield will be vital to stop the hosts from playing their natural game and to ensure we overwhelm them.

Similarly to Boga, Sassuolo will look to Domenico Berardi to provide a serious attacking threat on the opposite flank and again, the 25-year-old has been crucial for them this season with 13 goals and seven assists in 28 appearances.

We all know that Theo Hernandez is an important part of our attack and his powerful and explosive runs forward add a different dynamic to our team which helps us break the opposition down.

Importantly though, he has shown improvement in his defensive work since the restart, but this is going to be an assignment that is really going to test him. As with Calabria or Conti on the right side of our defence, Hernandez can ill-afford to switch off as Berardi will make him pay.

Further, the coaching staff will undoubtedly have been working with him on stopping the Sassuolo forward cutting in on his favoured left foot. It’s easier said than done, but Hernandez has to deny him those opportunities as Berardi can be decisive in a flash.