Milan will arguably face their most difficult test to date since the restart as we prepare to host Atalanta on Friday night with three key players ruled out.

La Dea are second in the Serie A table and have scored a staggering 95 goals in 35 league games so far this season as they have emerged as one of the top sides in Europe and are still in the hunt for the Scudetto.

That in itself makes it a tough assignment, but with Alessio Romagnoli ruled out with an injury while Theo Hernandez and Ismael Bennacer are absent due to suspension, it makes our task even more difficult.

In turn, Stefano Pioli will be forced into three changes at least and as per MilanNews, Matteo Gabbia, Diego Laxalt and Lucas Biglia are expected to fill those voids.

While Gabbia and Laxalt did well when stepping in at Sassuolo earlier this week, it’s still a big blow and raises question marks over our ability to keep our impressive run going against Atalanta, as the three players in question are hugely important to us both in terms of the individual quality that they offer and how they allow us to play a certain way.

Particularly if Biglia comes in for Bennacer, we’ll have to adjust our approach as we won’t be able to press and put pressure on Atalanta in the same way further up the pitch, and ultimately it may well force us to sit back more and try to dictate the tempo by slowing things down.

Laxalt will still provide energy and a great work-rate down the left flank, but Gabbia is going to have to put in a top performance to ensure we keep things tight at the back and Simon Kjaer’s presence and experience alongside him will undoubtedly be crucial in guiding him through the encounter.

That said, the report from MilanNews above notes that the Dane is a doubt himself, and so if he isn’t passed fit, that could see Franck Kessie deployed at the back in a makeshift backline and that could really spell trouble against one of the most prolific sides in Europe.

Meanwhile, La Gazzetta dello Sport have gone with the same XI, as per their graphic below, and so it’s more than likely that it’s how we’ll line up on Friday as we look to try and contain an excellent Atalanta side, while continuing our own impressive form in front of goal.

It’s hoped that we can put in a solid defensive shift and build on that, but there is every chance that we’ll leak goals given the players who are missing, and this turning into a shootout could be a great watch, but one that we may not come out of on the winning side.

Still, we’ll be full of confidence and belief after recent results, and those coming in have to prove that they’re capable of offering quality depth and can answer the call when necessary. 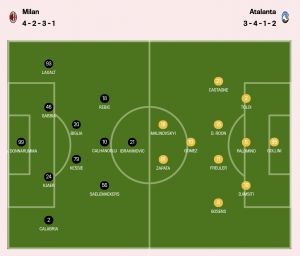