Milan battled to a 2-1 win over Sassuolo this week and it took a huge effort from the players to dig deep and find a way to claim all three points as tired legs set in.

The Rossoneri have been superb since the restart, and that’s despite having to play almost every three days as they have put in one brilliant shift in after another in each game that they’ve played.

It looked ominous early on at Sassuolo, as the hosts were looking threatening as they found spaces in our half in between the lines and created some opportunities.

Fortunately though, we were able to settle and get a foothold in the encounter before Zlatan Ibrahimovic’s opener certainly gave us a boost to go on and dictate proceedings for the most part. There were two key reasons behind that…

A key factor behind why were able to get ourselves in the game after the opening 10 or 15 minutes, was how we pressed high up the pitch and did so very effectively.

As seen in the first image below, this was in the build-up to the first goal with Franck Kessie and Ismael Bennacer pushing into Sassuolo’s half and the pass was in fact intercepted by the former, who then began our build-up play which resulted in Ibrahimovic heading home our opener.

In the second image, it was the same story in the second half as we forced Andrea Consigli into an error with Kessie again pouncing having pressed high up the pitch, and on that occasion it led to Bennacer hitting the post from distance.

This flipped the pressure that was being put on us in possession onto Sassuolo, who then made mistakes and were punished as we continue to produce clinical performances in the final third. 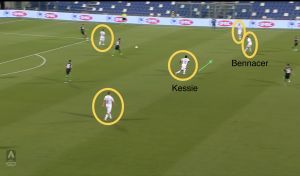 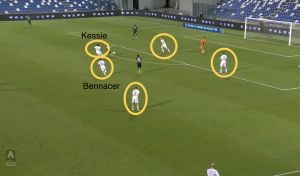 The Milan pair linked up for both goals and as seen in the images below, it was a ‘simple’ one-two punch as they carved Sassuolo open with a decisive pass and Ibrahimovic put the ball in the back of the net.

An important factor behind why this is so effective is that Calhanoglu is now playing in a more natural role which makes the most of his qualities. For both goals he found space between the Sassuolo midfield and defence, is able to pick his head up and find the pass and his technical quality and passing ability does the rest to find his teammate.

Credit must also go to Ibrahimovic on both occasions though, as he still had a lot to do to find the back of the net, but he did so expertly to bag a brace and keep our great run rolling on ahead of facing Atalanta on Friday night. 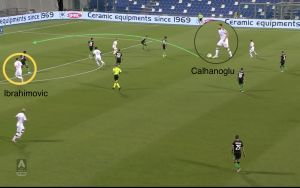 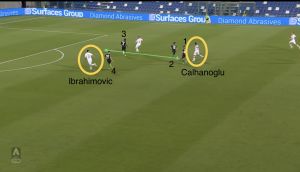 From the high press to the link-up play between our attacking players, it was another excellent shift from all concerned as we certainly looked tired and sluggish in the opening stages.

With Bennacer and Theo Hernandez suspended vs Atalanta and Alessio Romagnoli injured, we may have to tinker and adjust our approach accordingly, but it’s imperative that Kessie, Calhanoglu and Ibrahimovic continue to have a major influence on games and that in turn will undoubtedly give us a better chance of keeping our winning streak going.