While Milan were able to grind out a draw against Atalanta on Friday night, the absence of Ismael Bennacer in our midfield was noticeable as Lucas Biglia stepped in.

The 34-year-old will see his contract expire this summer, and while it’s arguably something that many Milan fans have known and identified for a while, he’s simply no longer of use to us moving forward with Football Italia noting earlier this month that he is expected to move on as a free agent at the end of the season.

His experience perhaps still holds weight in the dressing room and on the training pitch, but on the pitch in game situations, he has proven to be incapable of having the level of influence on games that is needed in our midfield moving forward.

For the opening 15 minutes or so against Atalanta, it was difficult to even notice Biglia’s presence on the pitch. He had no real impact on our build-up play or defensive shape as he was often bypassed in midfield and simply played a spectator role.

The first time he was significantly mentioned by the commentators was when the penalty was awarded against us, while he then proceeded to lose possession in the build-up to Atalanta’s equaliser.

While there was the odd first-time pass up the pitch and a flash of smart reading of play, there was arguably no real positive influence from Biglia being involved and aside from being caught out individually and not having the mobility and stamina to get about the pitch and impose himself on the encounter, his flaws had a knock-on effect on others too.

As seen in the first image below, Biglia was often bypassed in midfield with one simple vertical pass, and as he pushed up the pitch, he left space behind him which Ruslan Malinovskiy and Alejandro Gomez flourished in.

That in turn often forced one of the centre-halves to push up and leave a huge void behind them, but fortunately this wasn’t exposed more ruthlessly by the visitors. Further, Franck Kessie had to work doubly hard at times to cover his teammate’s failings and in doing so almost ran himself into the ground after another magnificent effort and performance. 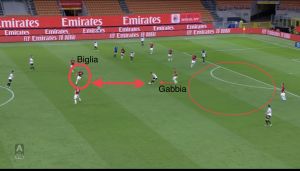 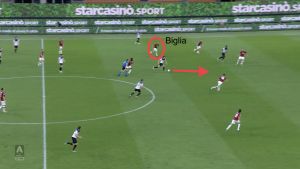 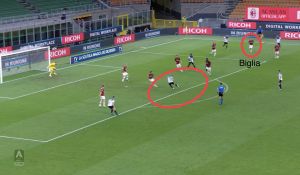 The second and third images above show how bad Biglia’s positioning was at times too, as he failed to provide a protective shield in front of the defence and left them exposed with plenty of space for Atalanta to look a threat.

While the first example is in the build-up to the equaliser, the Argentine stalwart is chasing shadows yet again while in the second he has been dragged out wide, unnecessarily when you consider two other Milan players are out there already, and that gives Gomez a chance at a free hit from just inside the box.

It was painfully obvious just how much we missed Bennacer anyway, but with Biglia coming nowhere near close to offering us some semblance of solidity in midfield, it was surprising that Rade Krunic didn’t either start the game or come on much earlier.

Nevertheless, if there was a perfect example of why it’s time for Biglia to move on and for Milan to continue down this path with individuals who have the tenacity, combativeness and quality on the ball like Bennacer and Kessie to play a pivotal role in both phases of the game, then this encounter was it.