As we continue to chase fifth place, Milan can’t afford to drop points in our penultimate game of the season as we face a trip to take on Sampdoria.

The Rossoneri have been superb since the restart, winning seven and picking up three draws in our 10 games to close the gap and get ourselves back in contention for a direct path to the Europa League group stage.

READ MORE: Triple renewal to secure futures of key trio would be ideal start to summer for Milan

Roma still boast a four-point lead with two games to go, and so we’ll have to rely on the Giallorossi dropping points. That said, all we can do is focus on doing our job and that’s securing another three points in midweek.

Key players were absent as we battled to a draw with Atalanta last time out, but Stefano Pioli will get at least two pivotal figures back for this one as we edge towards putting out our strongest XI.

Bennacer, Hernandez to return from suspension…

While Alessio Romagnoli remains sidelined due to injury, both Ismael Bennacer and Theo Hernandez will step straight back into the starting line-up after missing out against Atalanta due to suspension.

Diego Laxalt did a solid job standing in for Hernandez at left-back, but Lucas Biglia was certainly a weak point in our performance and so Bennacer’s return in particular will be a major boost for us.

The Algerian international offers a crucial presence in both phases of the game with his class in defence as well as his ability on the ball to get us transitioning from defence to attack quickly. In turn, he will no doubt be influential as we look to continue our excellent form.

That aside, the rest of the team arguably picks itself at this point with Davide Calabria likely to edge out Andrea Conti after starting in the last two games, while Matteo Gabbia will continue to deputise for Romagnoli.

However, there is perhaps one other decision that Pioli still has to make and that’s who starts on the right wing, with Samu Castillejo making his comeback from injury with a run out late on against Atalanta.

Alexis Saelemaekers will probably get the nod as his Spanish teammate is arguably still lacking match fitness, but given the additional quality that Castillejo can offer in the final third as well as his work rate, there is perhaps a case to be made that he should start and be replaced if he begins to fade.

Time will tell what Pioli opts to go with, but whatever side he puts out, it’s imperative we get the job done and potentially take the Europa League scrap into the last game.

Milan need to finish fifth to avoid the qualifying rounds, with Roma facing Torino and Juventus away to finish the Serie A campaign. It remains to be seen if the pieces fall into place to ensure an ideal end to the season for us. 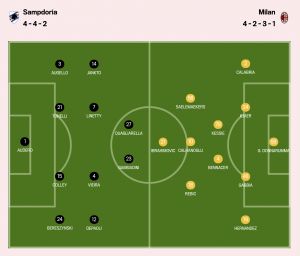