Another Serie A season is almost in the books as Milan host Cagliari in our final game of this campaign with little but pride to play for on Saturday night.

The Rossoneri will finish the season in sixth place and will enter the Europa League qualifying rounds, but it’s important for us to finish on a positive note and extend the momentum and belief that we’ve built since the restart.

Despite there not being anything substantial on the line in this encounter, it would be a surprise to see Stefano Pioli make too many changes, as the players who have got us in this position arguably deserve to see out the campaign in the starting XI with the five substitutions perhaps being made to ensure everyone gets a run out depending on the situation and scoreline.

With Ante Rebic suspended, the Croatian international will miss out and with Rafael Leao replacing him at half-time against Sampdoria, the youngster is expected to get the nod from the start in this one.

The 21-year-old has had a positive impact off the bench since the restart, scoring four goals and providing one assist in nine appearances.

However, there is a reason why he hasn’t been able to break back into Pioli’s starting line-up during that period, and we’ll see if he has addressed those issues this weekend.

It ultimately revolves around his all-round effort and what he offers to the team off the ball, as he can’t solely rely on flashes of quality when in possession to cement his place in the Milan XI. In turn, it’s hoped we see the right attitude and approach against Cagliari.

Elsewhere, it’s difficult to see where Pioli tinkers. Perhaps Samu Castillejo could replace Alexis Saelemaekers after getting more minutes in the latter stages at Sampdoria, but the rest of the team picks itself if we go with our strongest possible line-up with Alessio Romagnoli, Andrea Conti and Mateo Musacchio all sidelined by injury.

Cagliari beat champions Juventus in midweek, and so they have to be respected as they’ll be looking to finish in the top half of the Serie A table with a win. That means Milan can’t afford to be complacent, and it would be a real boost if we can finish on a high and take that into next season rather than end on a sour note and kick ourselves over a poor performance after what has been a superb run of form. 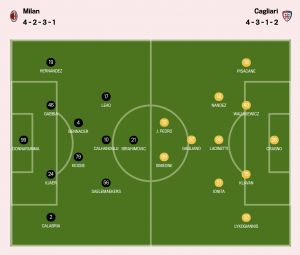